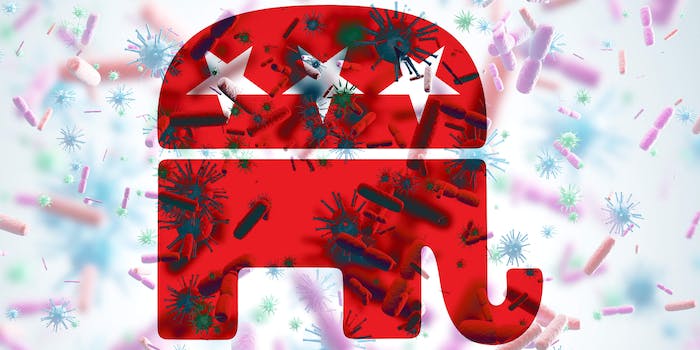 Remember when conservatives were the ones terrified of coronavirus?

They were freaked out, until it started affecting the president.

If you follow the messaging from leading conservatives on the coronavirus pandemic, you’ll see a few similar strands of thoughts. That this is no worse than the seasonal flu, that the death rate is similar to the flu as well. That’s because the coronavirus isn’t all that much to worry about.

The “freakout” we are seeing is all a creation of the media, predominantly aimed at taking down President Donald Trump.

In fact, Fox News host Laura Ingraham was just posting from a plane, calling it a great time to travel.

And Fox & Friends had Jerry Fallwell Jr. on, who said everyone was “overreacting” to coronavirus.

With the pace of news in the Trump era, it’s hard to remember what happened a week ago, let alone a month ago, but in January, as the coronavirus was spreading through Wuhan and China, conservatives and the far-right were the ones worrying about it.

Back in January, before the virus exploded in U.S., far-right figureheads were tossing hazmat suits on their avatars.

When they were accused of subtle racism for the behavior, they simply hid behind the “fact” that they were trying to raise awareness and highlight their concerns.

Which is true. Conservatives were constantly freaking out about the scene from Wuhan in January.

The constant concern and worry about what was going on in Wuhan at the outbreak stands in stark contrast over the right’s recent push to show that coronavirus concerns in the U.S. are no big deal.

Just today, Breitbart published an article highlighting how Democrats were supposedly too busy with impeachment to properly handle the coronavirus. It implies that Republicans and Trump were the ones working to raise concerns and properly address the problem, noting how Trump shut down flights to China at the end of January.

But if it was such a concern then, even before it ever spread to the U.S., then why are people discussing it now somehow overhyping the risk?

How is does it makes sense to be more concerned when the virus is solely in China, and less when it’s actively spreading through America?

Because discussing the risk and spread now makes the president look bad, whereas talking about it then didn’t.