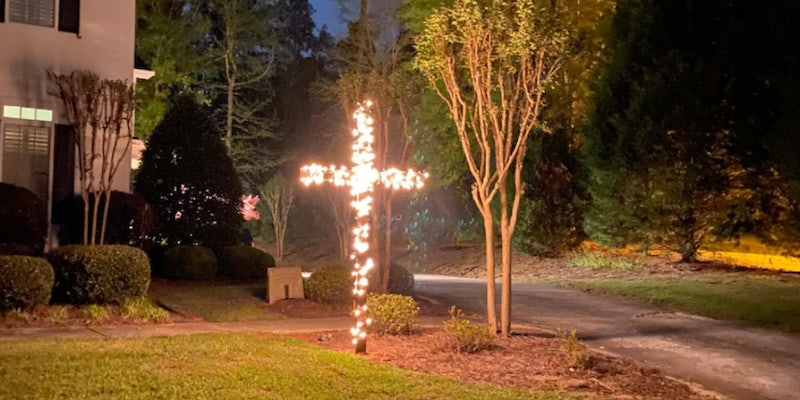 Well this was poorly thought out.

Erick Erickson, a conservative evangelical blogger, made a very interesting decision Saturday afternoon. In a post to Twitter, the 44-year-old revealed a cross neatly situated on his lawn, covered in lights that made it look almost ablaze. While he noted that the cross was purchased from former classmates of his children, the addition of the lights was too much for many people. Soon, dark jokes and memes overtook the post.

“Two brothers who went to school with my kids are making these and selling them for $20. They’re then taking the money and buying snacks for area hospital break rooms,” Erickson wrote alongside the photo. “I added the lights.”

Most people couldn’t resist the urge to draw Ku Klux Klan connections. The KKK has persisted in a far less violent form since its height in the early and mid-1920s, but never completely died out. The white supremacist hate group is distinguishable, in particular, through their recognizable white robes and through the burning of crosses. At the apex of the KKK’s popularity, wooden crosses were burned during meetings and sometimes on the lawns of people thought unwelcome in the world the group was trying to forge.

This historical context was at the forefront of many people’s minds when they saw the photos posted to Erickson’s Twitter page. “Erick Erickson put a burning cross in his yard and now we know what those extra ks are there for,” one commenter wrote, riffing on the spelling of Erickson’s first and last name.

Things got dark fast. “Two brothers who went to school with my kids are making these cool Covid-19 masks and selling them for $1,” one person wrote alongside a photo of a clearly KKK-esque mask. “They’re then taking the money and buying snacks for area hospital break rooms. I added the holes.”

While their fellows were busy making outright jokes, some commenters instead wondered if Erickson merely missed the meaning of a well-lit cross on one’s front lawn. “A very unfortunate resemblance or was it subliminally meant,” one person wrote.

Of course, there were also a very rare few who supported Erickson’s decision to place the cross on his front lawn. “It’s not burning. It’s a lighted cross,” one person wrote. “For people who choose to represent christianity to purchase and display on their own free will. Does that hurt you somehow?”

Mostly, the post inspired heaps of memes. Soon, people were riffing on Erickson’s other fictional Klan responsibilities. “I think we should all applauded (sic) Erick Erickson on his generous donation of PPE gear to healthcare workers,” one user wrote alongside a picture of fully suited Klansmen. “He’s (sic) a group of them wearing the new protective outfits.”