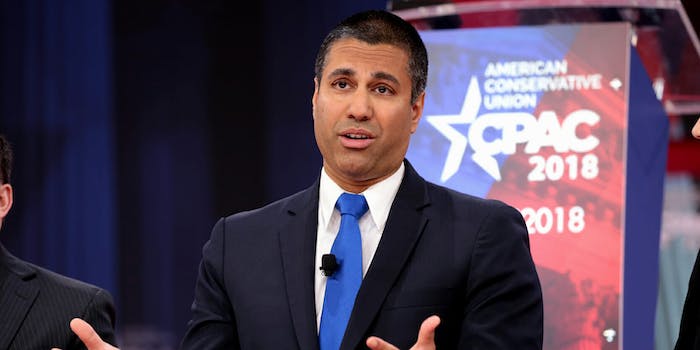 The FCC is officially ending net neutrality on June 11

There's still a lot of fighting going on until then.

The Federal Communications Commission (FCC) said on Thursday that its repeal of net neutrality rules will take effect in about a month, despite intense push back from both lawmakers and internet activists.

The FCC said its “Restoring Internet Freedom Order,” which rescinded net neutrality rules, will take effect on June 11. The move comes as some members of Congress are attempting to use the Congressional Review Act (CRA) to overturn the FCC’s decision with the help of online activists, websites, and apps.

“On June 11, these unnecessary and harmful Internet regulations will be repealed and the bipartisan, light-touch approach that served the online world well for nearly 20 years will be restored,” FCC Chairman Ajit Pai said in a statement.

The rules replacing net neutrality, which ensures that all internet traffic is treated equally, were passed down party lines late last year, but are currently being challenged. Several lawsuits have also been brought up in light of the FCC’s decision.

On Wednesday, Democratic lawmakers took the first major step in their efforts to save net neutrality by filing a discharge petition as part of the CRA efforts, paving the way for a full Senate vote. A simple majority is needed to pass the CRA, and the effort is just one Republican vote shy of achieving a majority.

Sen. Edward Markey (D-Mass.) said on Wednesday that the Senate could vote on the CRA as early as next week.

The push for one more vote has galvanized internet activists. Major websites and apps have teamed up for a “Red Alert” protest where they are directing internet users to pages where they can contact their local lawmakers and urge them to support the Senate CRA.

If the Senate CRA is successful, a similar effort will continue in the House of Representatives. If both houses of Congress pass their net neutrality CRAs, President Donald Trump would still need to sign them into law.