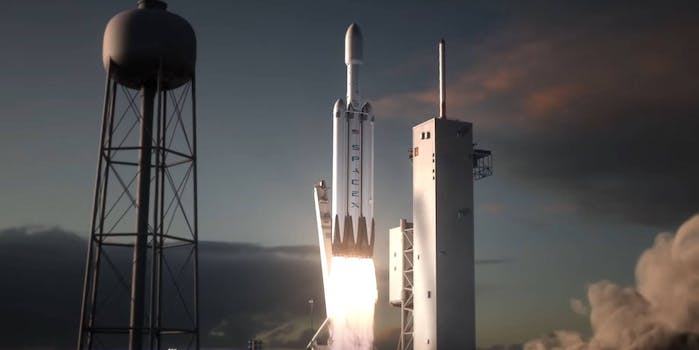 SpaceX to send 2 tourists around the moon in 2018

Elon Musk admits the plan has its dangers.

Elon Musk wants to send two tourists to the moon in a SpaceX rocket by the end of next year.

The business magnate announced Monday in a news conference that two individuals asked SpaceX to take them on a weeklong vacation 300,000 to 400,000 miles away from Earth in a Dragon 2 capsule, according to the New York Times.

Incredibly, the company agreed to the terms and plans to launch its Falcon Heavy rocket by late 2018.

The travel guide calls for a cruise past the surface of—not landing on—the moon. In Apollo 13 style, the rocket would let the moon’s gravity take it around its surface and back toward Earth. The two travelers will undergo health and fitness tests and extensive training for emergencies later this year.

This is going to be one expensive vacation. The Falcon Heavy rocket itself costs $90 million, and while Musk didn’t reveal exactly how much the two individuals agreed to pay, he did offer some context.

“A little bit more than the cost of a crewed mission to the space station would be,” Musk said in the call.

SpaceX released a statement regarding the trip, and said the two individuals “have already paid a significant deposit to do a moon mission.”

What may be more shocking than the request itself is the planned timeline. SpaceX has yet to launch a manned spacecraft, and the company is still running into some technical glitches.

According to the Guardian, Musk admitted the flight would be dangerous, but said the travelers have their eyes open, “We’re doing everything we can to minimize that risk, but it’s not zero. We would expect to do more than one mission of this nature.”

The rocket designated for the launch, the Falcon Heavy, was announced in 2011 for flights in 2013 but won’t be ready until this summer.

The planned trip around the moon next year would be the first time since 1972 that astronauts have gotten past low-Earth’s orbit.

Musk did not name the two individuals set for the moon. He did say they knew each other and were not from Hollywood.