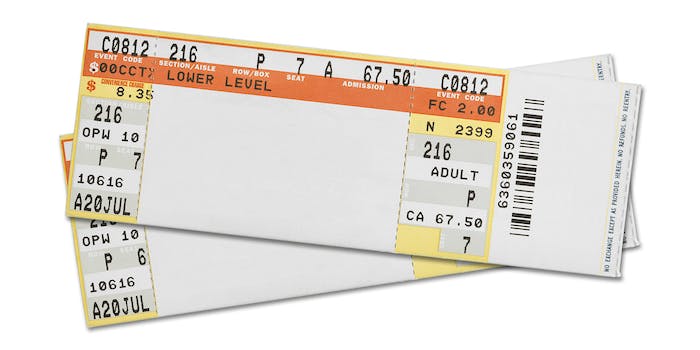 There's no evidence QAnon supporters tried to buy them either.

A viral tweet earlier this week showed tickets allegedly being sold online to a second inauguration for former President Donald Trump—only the tickets, obviously, weren’t real, and no evidence suggests they were being sold or purchased either.

The tweet, made on Sunday by the Twitter user @PamelaApostolo1, claimed that the tickets were being sold on sites frequented by followers of the QAnon conspiracy theory for “as high as $1,200 each.”

The fabricated tickets date the fictitious event for Aug. 15 and even include special musical guest stars Ted Nugent and Kid Rock. The belief that Trump will serve a second term remains a popular conspiracy theory among the former president’s supporters.

Yet numerous issues immediately stand out. Aside from the differing fonts used across the ticket, the image also includes watermarks from a stock photo website.

A reverse image search quickly yields the original photo that was used to create the fake tickets.

The allegation that Trump supporters had attempted to purchase the fake tickets is also unfounded.

As noted by Marc-André Argentino, a researcher at the International Centre for the Study of Radicalization, a search across popular QAnon websites found no such discussions being held. An investigation by Reuters was likewise unable to locate any examples of QAnon followers selling or purchasing such tickets.

The earliest appearance of the tickets discovered thus far, according to Reuters, came from a pro-Hillary Clinton Facebook group on June 11. Two days later, the image also appeared on the far-right imageboard 4chan where users mocked the conspiracy theory that Trump would serve a second term.

The tickets are reminiscient of a fake letter spread last November that was falsely attributed to Trump’s failed presidential campaign. The letter promised users free tickets to a second inauguration if a donation of $50 was made.