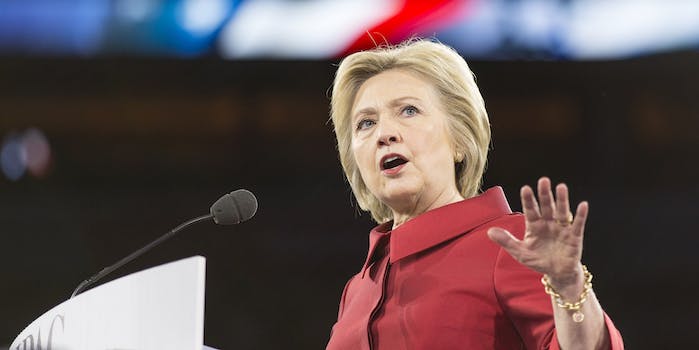 'Lives are at risk.'

Democratic presidential nominee Hillary Clinton, the politician at the center of the ridiculous Pizzagate theory, called for Congress to take action against fake news.

During a speech at a ceremony honoring retiring Senate Minority Leader Harry Reid on Thursday, Clinton called the spread of fake news an “epidemic,” and stated that sharing misinformation has put people’s lives at risk, the Hill reported.

“The epidemic of malicious fake news and false propaganda that flooded social media over the past year—it’s now clear the so-called fake news can have real-world consequences,” Clinton said. “This isn’t about politics or partisanship.”

In the weeks after the presidential election the subject of fake news has taken a life of its own. Facebook CEO Mark Zuckerberg first denied that the platform’s dissemination of fake news contributed to the election result, then announced new measures to eradicate sharing fake news.

Writers have come forward to take responsibility for their part in creating and sharing fake news, and other publications and evening show hosts have profiled fake news systems and would-be case studies.

Meanwhile, President-elect Donald Trump has tweeted misinformation since his victory, such as that the New York Times changed their meeting stipulations, and that millions of people voted illegally, without providing evidence.

The subject has grown to a point where even the papacy has gotten involved. Clinton’s comments on fake news come one day after Pope Francis said spreading fake news is a sin, and compared the act to the fetish of being aroused by interacting with feces.

Her call to action is also on the heels of a Pizzagate self-investigator shooting an assault rifle at least once in the Comet Ping Pong pizzeria in Washington D.C., the supposed base of the Pizzagate theory.

“Lives are at risk—lives of ordinary people just trying to go about their days, to do their jobs, contribute to their communities,” Clinton said. “It’s a danger that must be addressed and addressed quickly.”