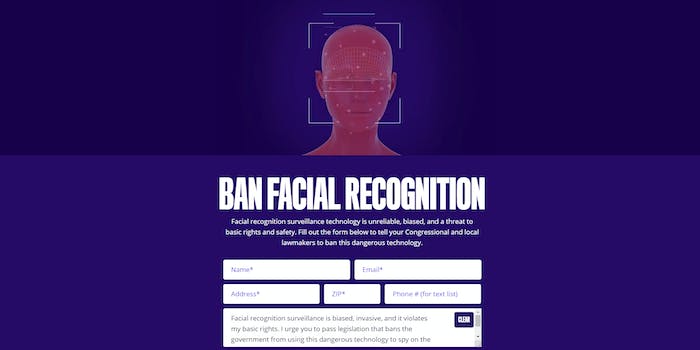 The group, Fight for the Future, says the technology poses a 'profound threat to the future of human society.'

Internet rights advocacy group Fight for the Future called for a “complete Federal ban” on government use of facial recognition surveillance today, citing a number of recent reports of government agencies using the technology.

The organization launched a website, BanFacialRecognition.com, that allows people to contact their lawmakers and urge them to pass “legislation that bans the government from using this dangerous technology to spy on the American public.”

“Imagine if we could go back in time and prevent governments around the world from ever building nuclear or biological weapons. That’s the moment in history we’re in right now with facial recognition,” Evan Greer, deputy director of Fight for the Future, said in a statement. “This surveillance technology poses such a profound threat to the future of human society and basic liberty that its dangers far outweigh any potential benefits. We don’t need to regulate it, we need to ban it entirely.”

The call for a federal ban on government use of facial recognition comes just days after the Washington Post reported that Immigration and Customs Enforcement (ICE) and Federal Bureau of Investigation (FBI) agents have used databases of state driver’s licenses along with the technology. The Post noted that much of the scanning is done without people’s consent or knowledge.

House Oversight Committee Chairman Rep. Elijah Cummings (D-Md.) told the newspaper that the access of the databases are “often done in the shadows with no consent.”

Earlier this summer, both Democrats and Republicans on the House Oversight and Reform Committee criticized the technology during several hearings.

Some cities, like San Francisco and Somerville, Massachusetts, have banned government agencies from using facial recognition technology. Other cities are considering their own ban, according to the Hill.