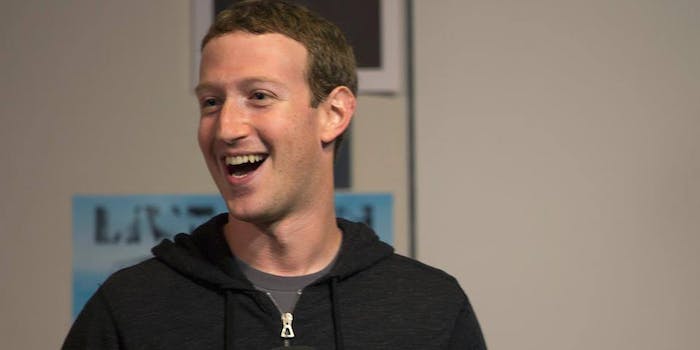 Facebook's not just out to make money, you know.

Mark Zuckerberg doesn’t like people assuming his company is only out to make money.

Zuckerberg, the billionaire founder and CEO of Facebook, is totally bummed out when people don’t take his mission and vision for “connecting the world” seriously.

In a public question and answer session in Bogotá, Colombia, on Wednesday, Facebook’s lead executive was asked to name one thing the public says about Facebook that he disagrees with.

“One thing that makes me sad is when people interpret our actions from the lens of ‘Oh, they’re just trying to make money,’” he said.

The company’s recent efforts for Internet.org, a project that aims to bring Internet connectivity to parts of the world that don’t yet have it, are admirable, but will also ultimately grow the company’s user base to include billions of additional users, which in turn will increase advertising revenue. Facebook’s seemingly altruistic efforts are often recognized by some reporters (this one included) as ultimately a capitalistic initiative, not necessarily executed from the goodness of the company’s heart.

Zuckerberg said that if he really only cared about making money, he would reassign the Facebook engineers working on the Internet.org project to focus instead on advertising. Of course, the Internet.org infrastructure must first be in place before the company can start monetizing users, so that argument doesn’t necessarily convince me of Facebook’s mission-driven motives.

Facebook’s CEO is on a roll with these question and answer sessions, and today one woman asked how it’s possible Zuckerberg doesn’t get bored running one of the world’s biggest companies. He cited luck and his passion for helping people stay connected to friends and family as the biggest boredom deterrents.

Zuckerberg also took a bit of a stab at Google Glass and said, “The future of tech could be glasses that don’t look weird like ones we have today.” The comment is a bit ironic since Zuckerberg owns Oculus, makers of the mega-bulky virtual reality gaming headset. Also, the CEO’s own wardrobe apparently consists of grey and blue hoodies and T-shirts. Zuckerberg did say, however, virtual reality will eventually be huge—but it’s just going to take a while.

It’s unclear how many more of these discussions Zuckerberg will be attending throughout the globe, but rest assured the 16th-richest person in the world apparently isn’t doing it for the money.