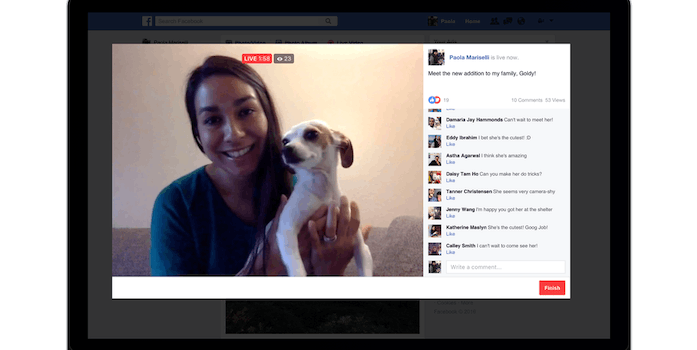 Facebook signs BuzzFeed, Vox, and others to major TV deals

We could soon be binge-watching Facebook sooner than you think.

This summer you could have a new place to watch TV: Facebook. The social media giant plans to move beyond live and user-uploaded content by offering its own suite of original programming.

In fact, Facebook’s push into the TV realm could happen as soon as mid-June, Business Insider reports. The company plans to offer roughly two-dozen shows at launch—a mix of 5-to-10 minute, low-budget projects, and a handful of more expensive, TV-quality shows. These videos would live under a redesigned video tab in the app. Interestingly, this news comes just a few days after Facebook decided to shutter its award-winning virtual reality film division, Oculus Story Studio.

Facebook plans to tap A-list Hollywood celebrities for some of these titles, while others will go the reality show route. One such example coming to Facebook is a dating show. Participants will first meet over VR before meeting in real life, according to Business Insider. And on the high-end route, Facebook wants prestige programming a la House of Cards or Scandal. CollegeHumor co-founder Ricky Van Veen, now Facebook’s global creative strategy lead, is heading up these efforts.

According to a recent report from Reuters, BuzzFeed, Vox, Group Nine Media, and ATTN are tapped to deliver short and long-form content for Facebook. Longer, 20- to 30-minute scripted shows will be owned by Facebook, which will pay up to $250,000 per episode for these titles. Facebook will reportedly pay up to $35,000 for shorter five- to 10-minute shows. The shows will initially be exclusive to Facebook, but after a period of time, partners will be able to sell them elsewhere as well.

Other internet companies have already invested heavy resources to make their platforms an alternate TV source for today’s teens, millennials, and cord-cutters. As part of its subscription service YouTube Red, YouTube will offer 15-to-25 YouTube Originals (mostly targeted at teens). It’ll also offer at least six shows on its free site, according to recent reports. Facebook nemesis Snap Inc. is reportedly working with NBCUniversal, the BBC, A+E Networks, and the NFL on Snapchat-based programming. And of course, Netflix and Amazon offer a growing number of original shows that rival mainstream TV and HBO quality.

In looking to best Snapchat, Facebook will likely target teens as the audience for most of its upcoming programs. The big question, though, is whether teens (or anyone) will flock to the social network for a TV-like experience. Unlike some of its competitors, Facebook’s shows won’t be locked behind a paywall—they’ll reportedly be ad-supported (like everything else on Facebook). And in terms of highlighting this new content, the company has options, too. Perhaps Facebook will break videos into its own separate app, like its recent Apple TV standalone app. Facebook could also inject its original programming as an auto-play after you watch some other video. As Netflix has found, that’s a surefire way to keep viewers glued to their screens.