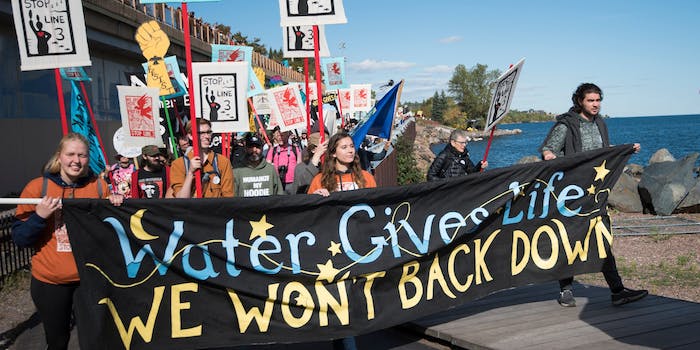 The company says it was just a mistake.

A week ago, Facebook announced a new initiative to combat climate change misinformation on the platform. Days later, it suspended hundreds of environmental advocates.

Activists told the Guardian, which first reported the suspensions, that hundreds of individual accounts associated with climate, indigenous, and social justice groups were also suspended for an alleged “intellectual property rights violation.”

Facebook says the removal of the pages was a mistake.

“Our systems mistakenly removed these accounts and content. They have since been restored and we’ve lifted any limits imposed on identified profiles,” a company spokesperson told the Daily Dot.

According to the Guardian, all those suspended were involved in a Facebook event last May concerning the Coastal GasLink pipeline in British Columbia, Canada. The suspensions reportedly came one day before another online action opposing the pipeline on the basis of its climate impact and that it cuts through indigenous lands.

“Videos of extreme violence, alt-right views, and calls for violence by militias in Kenosha, Wisconsin, are allowed to persist on Facebook,” Delee Nikal, a member of the Wet’suwet’en community, the First Nations people whose lands the pipeline is being built on, told the Guardian. “Yet we are banned and receive threats for permanent removal, for posting an online petition.”

Adding to activists’ ire is the suspensions coming on the heels of Facebook’s new initiative to curb climate misinformation.

After years of being criticized for allowing misleading and inaccurate information about climate change to circulate on its site, on Sept. 14, the company launched its Climate Science Information Center. The center offers data, links to reputable reporting, and tips for reducing your carbon footprint.

In the statement announcing the Climate Science Information Center, Facebook said, “Climate change is real. The science is unambiguous and the need to act grows more urgent by the day.”

Advocates say it isn’t enough. They claim there’s a disconnect between Facebook’s public statements and its policies.

The day after Facebook announced its new initiative, a coalition of environmental groups including Greenpeace, the Sierra Club, and the Waterkeeper Alliance released a statement calling it “half measures.”

“This new policy is a small step forward but does not address the larger climate disinformation crisis hiding in plain sight,” they said. “Just as Facebook has taken responsibility for its own carbon emissions, it must take responsibility to stop climate deniers from spreading disinformation on its platform.”

Facebook’s announcement about the new initiative said it does fact-check climate misinformation.

“As with all types of claims debunked by our fact-checkers, we reduce the distribution of these posts in News Feed and apply a warning label on top of these posts both on Facebook and Instagram so people understand that the content has been rated false,” it said.

The suspensions, although purportedly erroneous, only cemented environmental groups’ view that Facebook isn’t serious enough about combating climate change misinformation on the platform.

“Actions speak louder than words and once again Facebook has taken actions that are in stark contrast to public statements from the company,” Greenpeace USA Senior Corporate Campaigner Elizabeth Jardim told the Guardian.