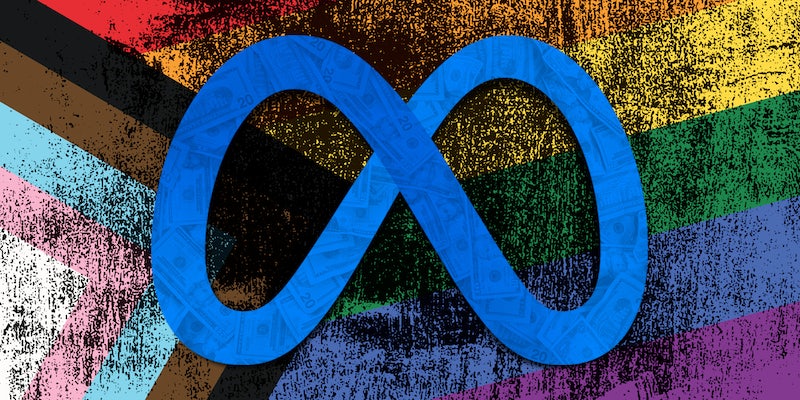 EXCLUSIVE: Facebook is still flooded with ‘groomer’ slurs despite Meta’s pledge to crack down

And the company is profiting.

Facebook continues to profit off ads containing the slur “groomer” over a month after it was alerted to the presence of such ads on the platform.

This summer, Facebook and Instagram parent company Meta told the Daily Dot that baselessly referring to the LGBTQ community or individuals as “groomers” is prohibited under its policies governing hate speech. Last month, Media Matters identified 134 ads on Facebook and Instagram on the platforms that contained the slur. Meta reportedly removed 40 ads in the last month for violating its policies.

Cumulatively, the over 150 ads that researchers identified which contain harmful “groomer” rhetoric have received over 1 million impressions. Meta’s ad library reportedly shows that the company has been paid $13,600 to run these ads.

According to the report, at least 19 new ads baselessly accusing LGBTQ people of grooming children have been added since Media Matters flagged the issue last month. These 19 ads have purportedly received more than 150,000 impressions.

Kayla Gogarty, deputy research director at Media Matters, told the Daily Dot that Meta is clearly aware of the issue but isn’t doing its due diligence to identify ads that violate its policies.

Gogarty says that perpetuating this myth is actively hurting LGBTQ people and youth. “We’re seeing it transfer into legislative action that can be really harmful… We’re seeing threats, protests at Pride, extremists showing up at Pride month.”

Media Matters’ report says that researchers also found ads that falsely “link the advancement of LGBTQ rights to the supposed normalization of pedophilia in society.”

Media Matters identified an ad by the conservative group Turning Point USA that included a tweet by Candace Owens stating, “I have no patience for this child groomer movement.” The ad ran on Instagram from Sept. 14-20 and generated between 25,000 and 30,000 impressions, per Meta’s ad library.

Another ad included in Media Matters’ report is by the far-right think tank Claremont Institute. It claims that the military is “grooming” children of servicemembers in “critical race theory, white shaming, queer theory, and left-wing activism.”

The ad links to an article claiming that “radical gender ideology” is being taught in schools on military bases. Gender ideology is commonly used as code for being transgender or nonbinary.

The ad library shows that Claremont Institute ran this promotion from mid-September to early October, beginning roughly a week after Media Matters first reported on ads with the groomer slur on the platforms. The ad, which ran on Facebook and Instagram, generated between 250,000 and 300,000 impressions, per the ad library.

The report also includes an ad by a local Republican Party in New Jersey urging people to vote for school board candidates who oppose “woke ideology.”

“They must publicly state their opposition to the States [sic] new sex education curriculum which sexualizes our children to advance the agenda of groomers,” Holmdel Republican Party’s ad states.

Gogarty of Media Matters says that the persistence of such ads implies that Meta puts profits before the LGBTQ community. She said that, like many companies, Meta puts out feel-good statements of support during Pride month even as profits from homophobia and transphobia on its platform.

“Those are just empty words when we see them turn a blind eye to the anti-LGBTQ rhetoric on their platform,” Gogarty said. “It’s really just another instance of Meta putting profit and engagement over the safety of its users.”