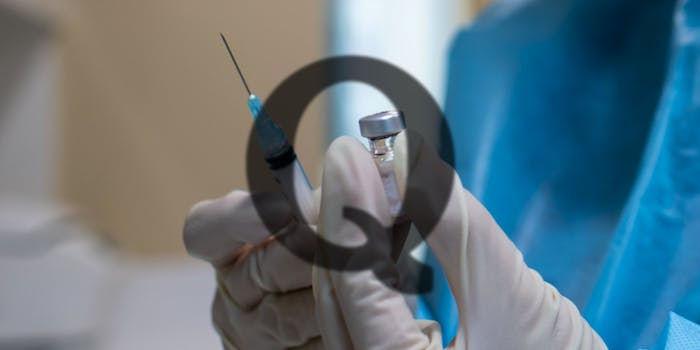 The documents found a strong correlation between QAnon and anti-vaccine beliefs.

The thousands of pages of files, dubbed the “Facebook Papers,” were provided to dozens of news outlets after Haugen disclosed the documents in an official complaint to the Securities and Exchange Commission (SEC) as well as Congress. Haugen also testified before Congress earlier this month, touching on a number of different issues.

Examination by the Daily Dot of one such document that was “last edited” on March 24 titled “COVID Vaccine Risks Appear To Be Concentrated Among A Few Subpopulation Segments,” notes a strong correlation between QAnon and anti-vaccine beliefs. The study was presented after Facebook announced a ban on QAnon across the platform in October 2020. A date is not shown on the presentation, but vaccines were not available in March 2020.

The analysis was conducted using U.S.-based data from “medium sized segments,” which Facebook describes as containing anywhere from 500,000 to 3 million users as well as anywhere from 1,000 to 500,000 groups and pages.

Facebook further argued that it was “highly unlikely that this co-occurence between” QAnon and vaccine hesitancy was “random” or coincidental.

“We do not know if QAnon created the preconditions for vaccine hesitancy beliefs or both were driven by the same latent factor, (such as receptiveness to conspiratorial content),” the document states. “It may not matter either way: we should be concerned about people affected by both problems either way.”

The finding is just the latest to be derived from the Facebook Papers, which, according to Haugen, show Facebook repeatedly prioritizing engagement over public health. Other internal documents from Facebook suggest that the company was well aware of the effect its algorithm was having on user radicalization.

This story is based on Frances Haugen’s disclosures to the Securities and Exchange Commission, which were also provided to Congress in redacted form by her legal team. The redacted versions received by Congress were obtained by a consortium of news organizations, including the Daily Dot, the New York Times, Politico, the Atlantic, Wired, the Verge, CNN, Gizmodo, and dozens of other outlets.