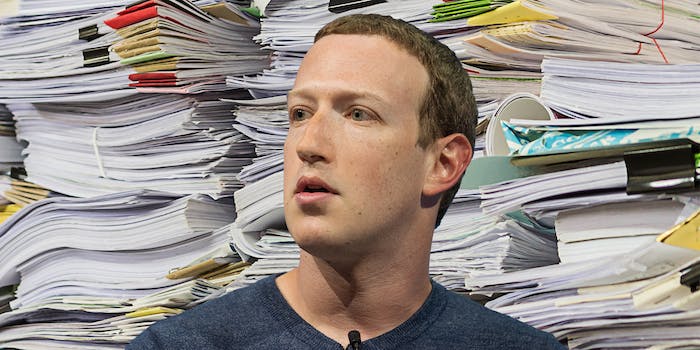 There are a ton of Facebook stories that published out today.

Facebook’s string of bad press is continuing, with the so-called “Facebook Papers” fueling a number of news stories about the social media giant, which began dropping this weekend.

The trove of documents were reviewed by more than a dozen news outlets, which all worked on stories about the site. The thousands of internal company documents were obtained by Frances Haugen, the former Facebook product manager who became a whistleblower and recently testified in Congress.

The documents span numerous topics including the Jan. 6 Capitol riot, internal tests on Facebook’s features, its declining use by teenage users, and more.

Here are five things you need to know about the Facebook Papers.

As supporters of former President Donald Trump stormed the U.S. Capitol building in a failed attempt to stop the certification of the 2020 election, employees of Facebook were frustrated with how the company handled it.

NBC News reports that in the hours after the attack on the Capitol, Facebook’s Chief Technology Officer Mike Schroepfer wrote in an internal message board that the platform need to allow for discussion of what occurred, but not promote violence. But several employees wrote in comments that they were frustrated.

“How are we expected to ignore when leadership overrides research-based policy decisions to better serve people like the groups inciting violence today?” an employee wrote, according to NBC News.

Meanwhile, CNN reports that an internal analysis was conducted on the “growth and mitigation” of Stop the Steal. The analysis noted that Facebook treated content and individuals around Stop the Steal on a case-by-case basis, rather than as a group.

“Almost all of the fastest-growing FB Groups were Stop the Steal during their peak growth,” the analysis said, according to CNN. “Because we were looking at each entity individually, rather than as a cohesive movement, we were only able to take down individual Groups and Pages once they exceeded a violation threshold.”

2) Facebook studied the “stress and anxiety” that came from the ‘Like’ button, but kept it because of engagement

Facebook researchers looked into the “Like” button on the platform in 2019 and found that it sometimes led to “stress and anxiety” among younger users, the New York Times reports.

Despite this, the social media giant decided to keep it because they also found that if the “Like” button was removed, posts and ads were interacted with less.

Internal researchers found that younger people, specifically teenage users, were rapidly abandoning Facebook. The researchers found, according to the Verge, that teenage users of the Facebook app declined 13% since 2019 and are projected that to drop as much as 45% over the next two years.

Meanwhile, people between the ages of 20 and 30 were also expected to use the app less, the researcher wrote in a memo, saying the “aging up issue is real.”

“Most young adults perceive Facebook as a place for people in their 40s and 50s,” a presentation read, adding that young adults found Facebook “boring, misleading, and negative” and that they associated the app with “privacy concerns, impact to their wellbeing” and “low awareness of relevant services.”

Politico notes that internal documents show that Facebook knows how much it dominates in the social media market, including that 78 percent of American adults use the company’s products. A 2021 document showed that Facebook wanted to become a “super app” that people use for a variety of activities.

The documents are important, because the Federal Trade Commission (FTC) filed an amended antitrust complaint against Facebook earlier this year. The agency alleged that Facebook had “maintained its monopoly position” by “systematically” acquiring “companies that it viewed as serious competitive threats” like WhatsApp and Instagram.

A former FTC staffer told Politico that the documents are “very, very strong support for the core story underneath” the agency’s complaint.

The social media giant’s public policy team, which is led by Joel Kaplan, stepped in to protect right-wing figures like Charlie Kirk, Diamond and Silk, and Breitbart after the violated misinformation policies, the news outlet noted.