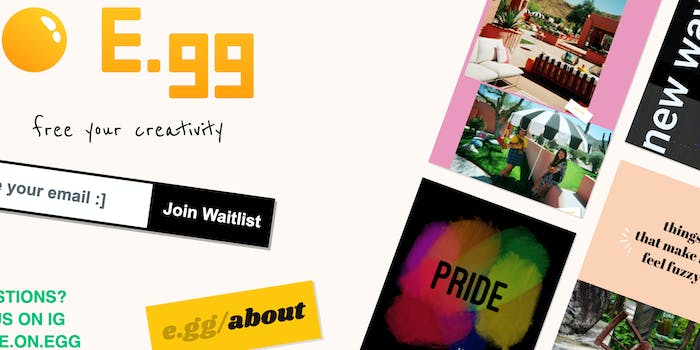 Why creatives are angry at Facebook’s new platform, E.gg

The new site had quite an introduction.

On Tuesday, Facebook’s New Product Experimentation (NPE) team shared a public beta of E.gg, a nostalgia-driven site aimed at evoking the simpler days of the internet. According to E.gg’s “about” page, it aims to “make more room for the weird and off-beat” and “give creative control back to people.” But within hours, the platform was facing criticism for failing to credit creators’ work.

As the site itself describes, E.gg is meant to capitalize on “The Early Internet” rather than introduce something entirely new, and it does this by offering a space to create “canvases,” or “free-form mixed media collages/pages.”

Many on Twitter were quick to note the “Geocities vibes,” referring to the popular web hosting service that was shut down in 2009.

However, some took issue with the fledgling site, with Input Mag reporting that E.gg faced criticism for failing to provide attribution for prominently-featured work.

“I literally see one of my gifs in this with no credit. What the fuck are you people doing?” tweeted Pasquale D’Silva in response to the launch announcement, sharing a screenshot.

Jason Toff from NPE responded that E.gg uses Giphy, another Facebook-owned site, to pull in content, and acknowledged that the site needs “better attribution,” pledging to work on that “asap.” Toff also tweeted that the NPE team will “hold off expanding E.gg” until this is addressed.

When Facebook announced the NPE team last July, the social media giant noted that, “We decided to use this separate brand name to help set the appropriate expectations with users that NPE Team apps will change very rapidly and will be shut down if we learn that they’re not useful to people.”

So, you do have to give them credit for living up to that statement—and hopefully, they’ll soon be giving credit to others, too.