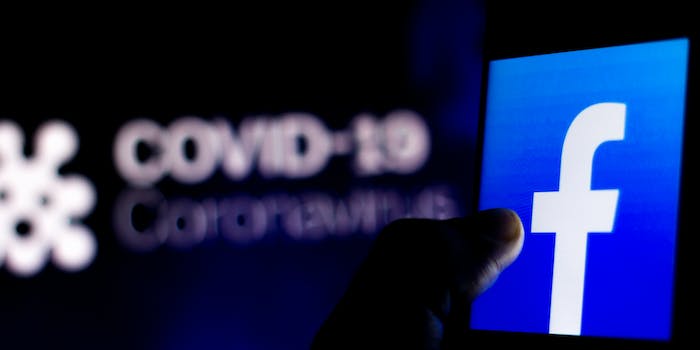 'The problem of organized COVID denial groups on Facebook is massive.'

Facebook has more than 1,700 groups about COVID-19 denial that have nearly 2.5 million members in them, according to new research.

The Institute for Research & Education on Human Rights (IREHR) published a lengthy report recently that dug into COVID denial groups on the social media platform. The organization found 1,732 groups dedicated to COVID denial that had 2,445,602 members in them from across the country.

“The problem of organized COVID denial groups on Facebook is massive,” the report reads. “It is national in scope and comes in many different rhetorical packages. Now in its second wave, COVID denial organizing on Facebook encompasses more than seventeen hundred groups with nearly two and a half million people involved.”

The COVID denial groups are spread throughout the United States, with every state having at least one group. California led all states with 117 groups, followed by Ohio with 82, Washington with 69, North Carolina with 67, and Michigan with 65, according to the study.

Most of the active groups were pushing reopening during the pandemic, according to the study, with anti-mask groups being second-most popular. Anti-vaccination, anti-mandates, and anti-lockdown groups were smaller—in terms of the number of members—than other groups.

IREHR said it identified 1,186 COVID denial Facebook groups last year and has made a list of them public as of April 2020. However, as of August, 822 of those 1,186 groups were still active. Additionally, the report says, 910 COVID denial groups were created within the last year, and 269 new groups were formed in August 2021 alone.

The organization said researchers examined “thousands of public and private Facebook groups” to get the data, and cataloged “membership, posts, videos, ads, and events in those groups.”

Throughout the pandemic, Facebook has faced criticism for the amount of anti-vaccination groups and content that has spread on the platform. Earlier this year, an internal Facebook study that was revealed by the Washington Post, found that more than half of the anti-vax content users saw came from just 111 accounts.

Late last year, Facebook said it would begin removing false claims about the coronavirus vaccine. It also previously had said that it was banning all ads that contained anti-vaccination messages.