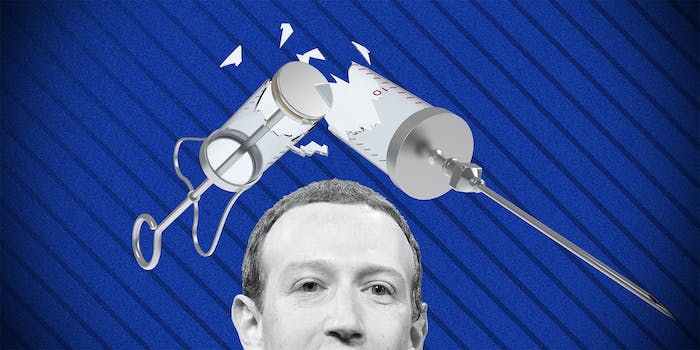 A study from the social media site attempts to find what causes users to become hesitant of vaccines.

An internal Facebook study has found that just 111 accounts are responsible for more than half of the platform’s anti-vaccination content.

The study, as revealed by the Washington Post on Sunday, attempts to understand what has led some users to become skeptical of vaccinations.

Facebook first divided its U.S. userbase into 638 categories in an effort to find out which segments were most likely to be receptive to anti-vaccination claims. Details of how the categories were formed were not available.

The social media platform not only discovered that its most vaccine skeptical users belonged to just 10 categories, but that more than 50 percent of the anti-vaccination content they consumed came from just 111 accounts. The study did not identify the accounts in question.

Although Facebook has banned vaccine misinformation, grey areas still exist. Users discussing what they believe to be side effects from a vaccine, for example, is considered important dialogue and remains permissible.

The study also reportedly found a significant overlap between vaccine hesitancy and QAnon, the far-right conspiracy movement that believes former President Donald Trump has been fighting a secret war against a global cabal of child-eating pedophiles.

In a statement on the study, Facebook spokeswoman Dani Lever said that the platform collects such information in an effort to help inform its policies. Facebook also stated that it has partnered with more than 60 health experts across the globe in order to provide accurate information on inoculations.

“Public health experts have made it clear that tackling vaccine hesitancy is a top priority in the COVID response, which is why we’ve launched a global campaign that has already connected 2 billion people to reliable information from health experts and remove false claims about COVID and vaccines,” Lever said. “This ongoing work will help to inform our efforts.”

Facebook has been under increased pressure to crack down on misinformation since the coronavirus pandemic began. A recent report from the online activist network Avaaz has even claimed that misinformation on the social media site was viewed more than 3.8 billion times over the past year.

A poll this month from PBS NewsHour, Marist and NPR found that close to 30 percent of Americans intend not to get a vaccine for the coronavirus.