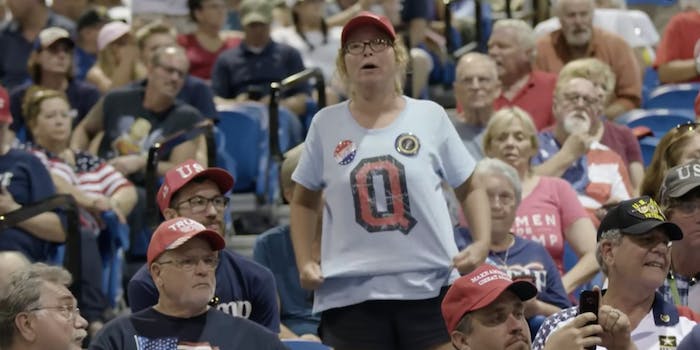 The marketplace says the conspiracy violates its policies on items that endorse misinformation.

The online marketplace Etsy announced on Wednesday that it will no longer permit users to sell merchandise related to QAnon.

Followers of the conspiracy theory believe that a mysterious government insider is leaving them cryptic clues online regarding President Donald Trump’s battle against a “deep state” child-eating pedophilia ring.

In a statement to Insider, Etsy said that it had begun removing merchandise linked to QAnon in accordance with its policies on prohibited items.

“Our seller policies prohibit items that promote hate, incite violence, or promote or endorse harmful misinformation,” an Etsy spokesperson said. “In accordance with these policies, we are removing items related to ‘QAnon’ from our marketplace.”

QAnon merchandise had previously flourished on the e-commerce website. As reported by the Daily Dot in July, a quick search of the site showed QAnon jewelry, stickers, hats, coffee mugs, home decorations, and t-shirts all available for purchase.

When asked at the time whether QAnon merchandise violated its policies, Etsy told the Daily Dot that it was continually monitoring such content.

However, a search on Wednesday of an account known to have previously sold QAnon merchandise shows that Etsy has yet to fully remove the conspiracy from its site.

The Daily Dot was able to locate at least one t-shirt that included “Q WWG1WGA QAnon” in the title. In an email to Etsy, the Daily Dot inquired about the t-shirt but did not hear back by press time. We’ll update this story if we hear back.

Etsy’s decision comes just one day after Facebook announced that it would ban all QAnon content outright after initially only removing that which called for violence.

Update 1:50pm CT, Oct. 7: In response to the Daily Dot’s questions about the t-shirt that included “Q WWG1WGA QAnon” in the title, Etsy said it reached out to its sellers about the new policy, but it may take time for it to be fully implemented.