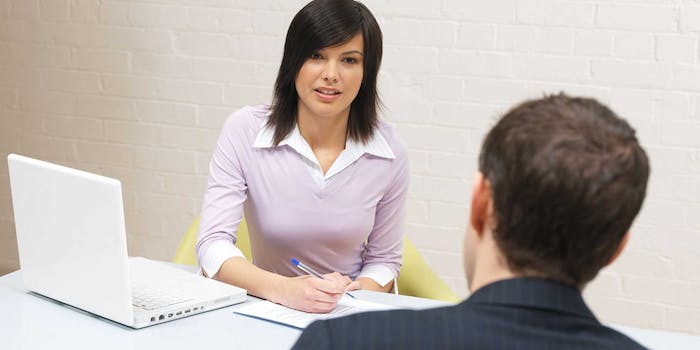 Hey, bosses of the world: maybe just stick to LinkedIn.

Social media can provide a wealth of information about a person—their political views, their feelings about cats, how hard they like to party on Wednesday nights, etc. Much of that info may seem pertinent to companies looking to hire workers, which is why an increasing number of firms have taken to researching applicants over social media during the hiring process. However, as a recent study demonstrates, employers may want to think twice about engaging in this type of social media snooping because, in the long run, it has the potential do them more harm then good.

The study, entitled ?Examining Applicant Reactions to the Use of Social Networking Websites in Pre-Employment Screening” and published in the Journal of Business and Psychology, looked at job applicants’ views of a given company they were applying to work for after they discovered that company had been clandestinely peeking at their social media activity. Unsurprisingly, the applicants did not think particularly highly of the practice and, in some cases, made them consider suing the company involved.

The study looked at 175 students who applied for a temporary, paid research assistant position at a large, American university that supposedly would have given them $75 to spend an hour rating a series of Web pages created by the outside organization doing the hiring. After completing an initial application, some of the participants were sent an email informing them that ?[the] hiring organization had just finished evaluating their social networking websites in order to assess professionalism.”

All of the students were then given a survey, which they were assured would remain anonymous to the hiring organization, for their opinions about the hiring process. Through the survey, the students who were told the company had viewed their profiles without prior notice or consent, reported that the process had been invasive to their privacy at a significantly higher rate and saw the company as a far less attractive place to work.

The authors followed up with a similar effort looking to determine if the same dynamic held outside of an academic setting. In the second experiment, the researchers asked just over 200 people recruited through Amazon’s Mechanical Turk online crowdsourcing marketplace to imagine they were applying for a job. The participants were divided into groups where some were told their social networking profiles were viewed ?to assess their professionalism” and others were not.

As with the first experiment, a survey taken after the completion of the experiment found the hypothetical applicants who had their profiles assessed not only had a far more negative view of the company and were less likely to accept a job there, but also were more likely to consider pursuing legal action for invasion of privacy or violating anti-discrimination laws. These effects were even more pronounced for applicants who were told they wouldn’t ultimately have been selected for the theoretical job.

?When individuals feel they have been treated unfairly; they are less likely to accept a job offer and, if already employed by the organization, they are more likely to quit their jobs,” the report’s authors write. ?In addition, a negative relationship between fairness and intentions to recommend an organization to others has been found, which could eventually influence the effectiveness of a company’s selection procedures by impacting the size of future applicant pools.”

The problem is that, despite their ubiquity, many people view social networks like Facebook and Twitter being encompassed inside the private, social sphere of friends and family. This perception is in contrast to professionally-minded networks like LinkedIn, which present themselves as being more focused on communication with co-workers and potential employers. When someone from one world crosses over and accesses information supposedly presented for the other, it can seem like an invasion of privacy—or worse.

?This research has important practical implications for organizations,” write the authors. ?The results indicate that organizations seeking to hire individuals should consider the costs and benefits of the clandestine use of social networking websites to screen employees. Such practices could reduce the attractiveness of an organization during various phases of the selection process, especially if the applicant pool at large knows or suspects that the organization engages in such screening.”

The number of employers using social media to check up on job applicants has grown dramatically over the years. In 2006, only just over a quarter of employers reported doing so. That number increased to 45 percent in 2009 and current estimates place it at around two-thirds.

In addition to having job applicants come away with a poor impression of the company, using Facebook as part of the hiring process poses other risks for companies. Looking at someone’s Facebook page could give a hiring manager pieces of information—such as sexual orientation, religious belief or medical conditions—that they may be prohibited from using when making a decision about whom to hire under state or federal law. Accessing this information behind a job candidate’s back could open up the company to a discrimination lawsuit.

Some states have taken steps to block the practice. Calif., for example, passed a law in 2012 banning employers from demanding job applicants hand over their social media passwords, a practice some used to look at the Facebook pages of applicants who had set their profiles to private.