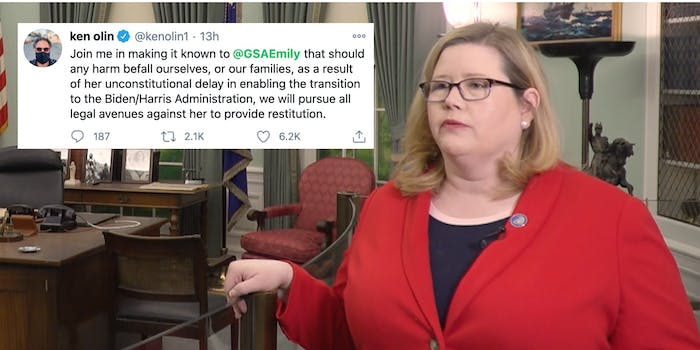 The internet is demanding that Emily Murphy sign off on the presidential transition.

Twitter users are bombarding the account of General Services Administrator Emily Murphy, the government official tasked with affirming the results of the 2020 presidential election.

Murphy, an appointee of President Donald Trump, caught the attention of Twitter users on Wednesday after becoming the subject of a CNN exposé.

The article details the “terrible situation” Murphy has found herself in, stuck between Trump’s refusal to concede and her primary role of formally starting the transition for President-elect Joe Biden.

Murphy, according to CNN, is reportedly receiving death threats and “is working to interpret vague agency guidelines and follow what she sees as precedent to wait to sign off on the election result.”

But critics argue that Murphy is merely delaying the inevitable. The Biden team also says the delay is causing real-world consequences for both national security and the response to COVID-19.

Now, Twitter users are flooding Murphy’s account with demands that she either resign or affirm the election results.

“Hi there, @GSAEmily, I can be of some help here,” @TheRealHoarse said. “The election is over. Biden won. Do your goddamned job, you fucking hack.”

Others attacked CNN for their portrayal of the situation while tagging Murphy in their tweets.

“[email protected] wrote an article that almost reads as if they want people to feel bad for @GSAEmily,” @altNOAA said. “The guidelines say that if the ‘apparent winner’ isn’t the incumbent, the transition should begin. And we do have a de facto apparent winner. Enough.”

Some have even threatened Murphy with legal action for potential damages that could occur during the political stalemate.

“Join me in making it known to @GSAEmily that should any harm befall ourselves, or our families, as a result of her unconstitutional delay in enabling the transition to the Biden/Harris Administration, we will pursue all legal avenues against her to provide restitution,” @kenolin1 said.

But the reality at the end of the day is that public pressure on Twitter is unlikely to sway Murphy, who is clearly attempting to avoid the fiery wrath of the president.

While hardly an excuse, it also seems certain that Murphy will sign off on the transition when the president’s stalling tactic runs its course.

The spotlight on Murphy comes amid the president’s continued losses in court, where he has unsuccessfully attempted to overturn election results across the country.

Even with the walls closing in, Trump has continued to spread debunked conspiracy theories about widespread election fraud in an apparent effort to avoid admitting defeat.

Trump’s erratic behavior and the worsening pandemic will only serve to increase the pressure on Murphy, who will undoubtedly remain a center of focus until she finally signs off on the transition.