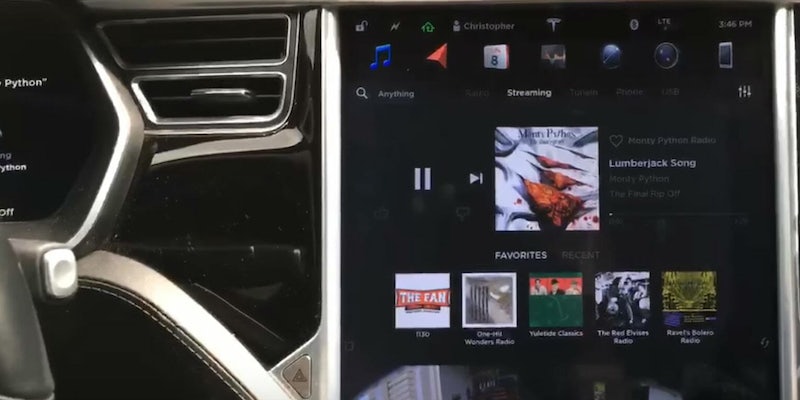 The Easter egg is only available in the U.S., but will be coming to Canada and the U.K. soon.

If Teslas are going to be fully autonomous in the next few years, they’re going to have to find ways to keep their owners entertained once the novelty (and fear) wears off. What better way to do that than with some Monty Python?

Elon Musk went on another one of his Twitter rants yesterday revealing that all Tesla models in the U.S. can play any Monty Python skit. It is the latest in a series of Easter eggs created by the company. First, there was the rainbow charge port, then a somewhat terrifying Christmas-inspired feature, and finally Rainbow Road from Mario Kart.

The CEO teased the newest hidden feature with the music video of “Always Look on the Bright Side of Life,” a comedy song written by Eric Idle for Monty Python’s Life of Bryan.

Musk then dropped a bombshell that could end up influencing your next car purchase.

In the US, you can ask your Tesla to play any Monty Python (or other comedy) skit. Doesn't work outside US yet.

We’ve learned over the years that when Musk says something that sounds sarcastic, it probably isn’t. Once again, he doesn’t disappoint.

YouTuber KmanAuto tested the Easter egg a few minutes after Musk broke the news. He pressed the voice command button and told his car to “Play Monty Python.” After a few failed attempts, the car eventually begins cycling through skits from the legendary comedy sketch group.

Musk said the feature will be available in Canada and the U.K. soon. One Twitter user said it works fine in Norway, to which Musk replied, “cool.” He did later admit to having a soft spot for the country in an unrelated conversation.

I love Norway, which is the world leader in EV adoption! Great example for the rest of the world.

Oh, and in case you were wondering, Musk said this is possibly his favorite skit: