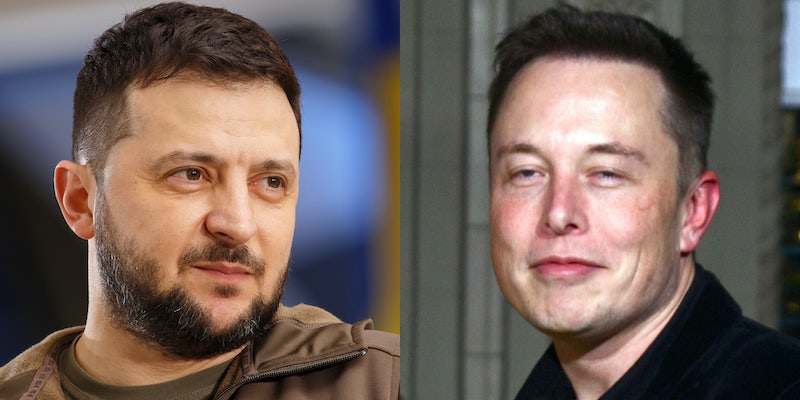 A Ukrainian ambassador told Musk to 'f*ck off.'

Elon Musk is in hot water over a tweet about his ideas for a peace deal between Russia and Ukraine. His idea even prompted a response from Ukrainian President Volodymyr Zelenskyy.

On Monday, Musk posted a Twitter poll proposing new elections in the Russian-annexed territories of Ukraine and full recognition of Crimea as a part of Russia.

His thoughts were quickly lambasted by critics, including Ukrainian officials.

“Elon, you’re a cool guy and thanks for the Starlink but it’d be so very wonderful if you were to carry out votes on things that you know about. We don’t carry out votes on apartheid and Nelson Mandela,” Ukrainian newspaper the Kyiv Post said in a reply.

Musk went on to add that his proposals are the “highly likely” outcome and it’s “just a question of how many die before then.” He also claimed that a “possible, albeit unlikely, outcome from this conflict is nuclear war.”

Ukrainian President Zelenskyy eventually weighed in on the debate.

Monday afternoon, Zelenskyy posted a Twitter poll of his own asking which Musk people liked more, one who supports Ukraine or who supports Russia.

As of this writing, most people have voted that they prefer Musk supporting Ukraine. And most have voted against Musk’s suggestions for a peace deal that many see as heavily favorable to Russia.

Ukraine’s ambassador to Germany also had some choice words for Musk.

Ambassador Andrij Melnyk told the Tesla Chief Executive Officer to “fuck off.” Melnyk described this as his “very diplomatic reply.”

Last week, Musk’s texts in his ongoing litigation with Twitter revealed that he believes Russian state-owned media includes “lots of bullshit” but “had some good points.” Musk was commenting on news that Russian media had been banned from the United States after invading Ukraine.

Musk continued defending his tweet about Ukraine and Russia throughout much of Monday afternoon.