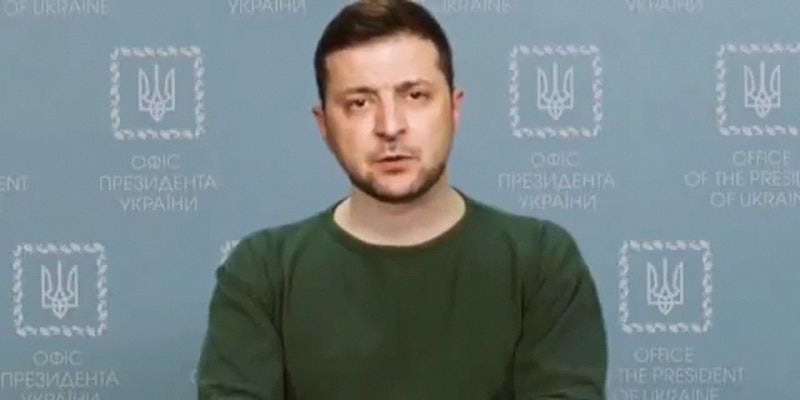 The Ukrainian president responded to the fake video by calling on Russian troops to surrender instead.

A deepfake video showing Ukrainian President Volodymyr Zelenskyy asking his soldiers to lay down their weapons has surfaced online amid Russia’s ongoing invasion.

The altered footage appeared on the website for Segodnya, a Russian-language Ukrainian tabloid newspaper. Text claiming that Zelensky had ordered his troops to stand down was also placed on a news ticker during a live television broadcast from Ukraine 24.

In a statement on Instagram, Segodnya accused “enemy hackers” of being responsible.

“Friends, we have repeatedly warned about this,” Segodnya wrote. “Nobody is going to give up. Especially in conditions when the Russian army is defeated in battles with the Ukrainian army!”

The Ukrainian government had warned in remarks on Facebook just two weeks ago that it believed Russian President Vladimir Putin would deploy deepfake technology as part of his attempts to overthrow Zelensky’s government.

“His goal is to disorient, sow panic, disbelieve citizens, and incite our troops to retreat,” a government agency wrote.

But it appears the video’s poor quality as well as Zelenskyy’s swift response on Wednesday has stunted the deepfake’s ability to trick its intended targets.

In a video addressing the altered footage, Zelenskyy called on the Russian military to lay down its weapons instead.

“If I can offer someone to lay down their arms, it’s the Russian military,” Zelenskyy said. “Go home. Because we’re home. We are defending our land, our children, and our families.”

The deepfake is likely part of the ongoing information war between Russia and Ukraine. It thus far remains unclear who is responsible for both creating and placing the video online.

Sam Gregory, the program director at the human rights organization WITNESS, told the Daily Dot that the video appeared to be the first high-level deepfake used in the Ukraine conflict.

“There have been parody videos of Putin and solidarity deepfakes with Zelenskyy but no major deceptive deepfakes, just lots of shallowfakes with miscontexutalized and deceptively edited media on TikTok and elsewhere,” Gregory said. “Fortunately the Ukrainian government has very specifically pre-bunked this potential deepfake usage and warned its population, and has the ability to quickly debunk with Zelenskyy himself. In other countries where these two steps haven’t taken place, even poor quality deepfakes have had impact because even poor quality online fakes leave room for generating debate on authenticity and undermining confidence in videos.”

At least 15,000 people are believed to have died while more than 3 million have been displaced since Russia began its invasion on February 24.