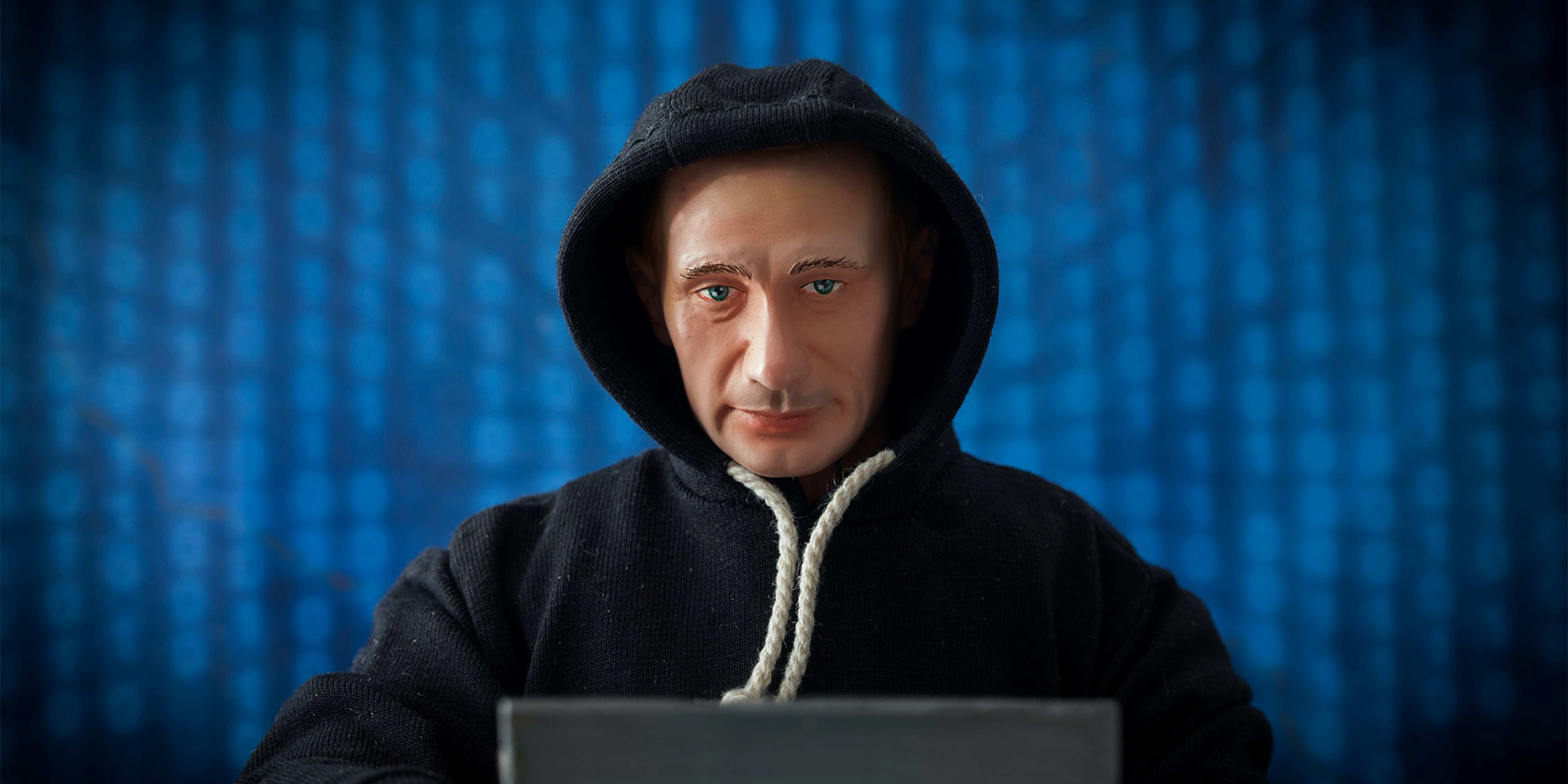 Russian propaganda and disinformation commingle across the web.

Since Russia invaded Ukraine in late February, pro-Russian propaganda about the war proliferated across the internet.

It may not entirely be the work of the Kremlin, but useful rubes, enthusiastic right-wingers, and people eager to share have led to a maelstrom of misleading videos and claims, despite all the efforts of social media platforms to restrict it.

The ease with which it can seep across the internet—despite the biggest tech giants gathering together to create a digital dragnet—reveals that no clampdown can ever fully achieve its intended purpose given the scope, reach, and sheer numbers of users online.

Ukraine’s online efforts have been met by a public eager to share good news, cast the nation in a positive light, and share tales of the Russian misdeeds, tilting the appearance of who is winning the online information war. Russia, despite an online uphill battle, continues a push that to some extent is successfully portraying its invasion as justified and undermining support for Ukraine.

University of Nevada, Las Vegas researcher Mary Blankenship studies online disinformation, misinformation, and propaganda. Blankenship, who is from Ukraine, said information warfare is a “huge aspect” of Russia’s assault on her home country. She described Russia’s effort as international, intentional, and sophisticated.

“Russia has a lot of experience, especially within social media and spreading disinformation,” Blankenship told the Daily Dot. “That was brought to light starting with the election back in 2016 with how prevalent it is,” she added, referring to Russia’s effort to influence the United States’ elections.

The Kremlin is using this skill at creating and disseminating propaganda and disinformation online, where a single image or post can go viral and change minds all over the globe.

On March 16, Russia bombed the Donetsk Regional Drama Theatre in Mariupol, Ukraine where civilians were sheltering. An estimated 300, among them many women and children, perished. In the immediate aftermath, Russia hastened to blame Ukraine for the bombing. The Russian Ministry of Defense denied responsibility. State-run media outlets TASS and ANNA News claimed that the theater was blown up by Ukrainian neo-Nazis from the Azov Battalion.

Part of the Ukrainian National Guard, the Azov movement’s roots are in far-right extremism. Members today deny “allegations of fascism, nazism and racism,” per CNN.

Azov comprises a slim fraction of Ukraine’s total forces. In spite of its miniscule size, Russia uses the Azov Battalion as a scapegoat for its invasion.

Following the theater bombing, Russian sympathizers, among them many American right-wing figures and media, amplified Russia’s version of events. Conservative journalist Max Blumenthal claimed that Azov Battalion staged the bombing as a false flag attack to convince the North Atlantic Treaty Organization (NATO) to intervene in the war.

Meanwhile, despite tech giants’ crackdowns, posts supportive of Russia bounce rapidly from platform to platform, at times being slightly altered in an internet version of “telephone.”

One is a video of a man protesting Canada providing aid to Ukraine. The camera swings around as he approaches the stage at an event in a conference room. “Stop escalating the war. Stop sending arms,” he shouts. “Why didn’t you push Kyiv to sign the Minsk accord? No to NATO. Shame on you. You’re going to push us to World War III.”

The man holding the camera is Yves Engler, a Canadian author and opponent of NATO. Engler posted the footage of himself interrupting a speech by Canadian Foreign Minister Mélanie Joly on Twitter last week, where it amassed 350,000 views in days.

Engler tweeted that he interrupted the speech to “challenge Canada’s escalation of violence in Ukraine, weapons deliveries and NATO.”

This was just the beginning of the video’s journey.

RT’s coverage of the video claims the “west” provoked it to invade. Blaming the west and NATO is one of many theories Russia is pushing to justify its preemptive attack on its neighbor.

Engler’s video and Russia’s coverage of it was reposted by QAnon conspiracy theorists and far-right figures in the United States, many of whom have taken Russia’s side in the war, and in other pro-Russia spaces.

Tech companies have restricted and in some areas blocked access to Russia state media like RT and Sputnik News, but their reporting continues flowing from platforms that haven’t. From there it spreads across the web, polluting the information ecosystem with disinformation and propaganda.

The video is just one of thousands of photos and videos floating around the internet that are part of Russia’s push to control the online war discourse.

“The problem is it completely catapults the discussion of the real issue and transfers it into sideline discussions of what are specific topics or specific facts that are true or not,” disinformation researcher Blankenship said. “In this scenario it can delay action or completely stop action by political figures or institutions.”

In war, even a minor delay or inaction can be the difference of life or death, she added.

The posts on these platforms repeat false information, such as Russia’s claim that its bombing of a Ukrainian maternity hospital was actually staged, that it invaded to liberate Ukraine, or that the nation—led by a Jewish descendant of Holocaust survivors—has descended into neo-Nazism. Russia has insisted that its aim is the “denazification” and “demilitarization” of Ukraine, an argument Ukraine and most of the world rejects. People in these online spaces also accuse Ukraine of committing the very atrocities Russia has been accused of in the war and portray its invasion as a humanitarian mission to rescue a neighbor rather than an unprovoked attack on a sovereign nation.

People post photos and videos of Russian soldiers appearing to feed and care for people identified as Ukrainians, of damaged Ukrainian military equipment, and Ukrainians wounded or killed in the war—casting Russia as both triumphant and humanitarian.

Above all, people insist that Russia will and should be the ultimate victor. Even as reports emerge of Russian soldiers dying by the thousands, abandoning military equipment, and retreating, some online insist Russia is winning.

Blankenship said that Russia’s propaganda campaign has two aims: to motivate and to intimidate.

The photos below of Russian military equipment and soldiers are designed to intimidate. Pro-Kremlin media outlet ANNA News credited the images to a “war correspondent” for VGTRK, a Russian state television and radio outlet.

The earliest example the Daily Dot found of the above images of the Russian invasion was in the Russian language Military Informant Telegram channel on March 22.

Within hours, the photos appeared on multiple platforms.

When a member of a pro-Russia subreddit where one of the images was posted expressed dismay at the destruction and wondered how Ukraine will recover, the person who posted the photo replied, “It’ll heal under Russia’s control.” The pictures were also reposted by a Twitter user who describes themselves as an “ANNA enthusiast” and routinely tweets articles by ANNA News. The admin of a private Facebook group with thousands of members who post images of military equipment from the war reposted the photos and received universally positive reactions.

In these spaces, there’s a steady drumbeat of opposition to the widely accepted notion that Ukraine is the victim of an unprovoked assault ordered by Russian President Vladimir Putin.

Support for Russia runs rampant in many private Facebook groups where people post admiring photos and videos of Russian military equipment and soldiers. Memes and crude cartoons are also common, as are graphic images of those killed or wounded. Often posts in these spaces have Russian watermarks or logos.

Many, such as the one below of a Russian soldier stepping on a Ukrainian flag with a graffiti swastika crossed out with red paint on a wall nearby, push Russia’s false claim that Ukraine has been taken over from within by neo-Nazis.

These spaces serve to both spread and sanitize propaganda. It’s often unclear whether the content has a Russian source or is possibly being spread by a Russian troll farm, such as the infamous Internet Research Agency (IRA) that meddled in the 2016 election. ProPublica reported earlier this month that the IRA appears to be behind much anti-Ukraine propaganda circulating online. Blankenship said that Russia utilizes automatic and semiautomatic bots in addition to troll farms and that it tends to favor Twitter, Facebook, VK, and Telegram as platforms to disseminate propaganda and disinformation.

She said that Russia ramped up its online efforts as early as February. That month, Blankenship tracked a 141% increase in the number of new Twitter accounts registered from the previous February in Nevada alone.

“You’ll get newly made accounts and all they’ll talk about is try to tweet and retweet a certain hashtag….” she said. “Two weeks ago there was a hashtag that was trending that says #istandwithputin.”

The Daily Dot also found posts by people attempting to identify the location of Ukrainian soldiers and volunteers to mark them for death.

In a video circulated widely on multiple platforms last week, foreigner volunteers for the Ukrainian war effort film from inside an apartment in Ukraine.

“British mercenaries in Kyiv! They will soon be found out!!” an administrator of a private Facebook group with tens of thousands of subscribers captioned the video.

The Daily Dot found the same video on Telegram and Twitter the same day as the March 22 Facebook post. Commenters wished the men death and worked to identify their location. “Where’s [a] hypersonic missile when you need it,” wrote one on Telegram. A Twitter user replied to the video, “If I can already figure out what building this is, then these guys are toast. Reddit army….”

Propaganda always spreads on both sides of any conflict. On the Ukraine side, there’s the tale of a mythical “Ghost of Kyiv,” a Ukrainian pilot that supposedly shot down six Russian jets in a single day in February. Photo and video evidence of the so-called Ghost has been debunked.

Disinformation researchers like Blankenship point out that Ukraine doesn’t have a robust propaganda machine like the Kremlin, nor its many years of experience, however.

“On the Ukrainian side there is not nearly as much disinformation and propaganda,” said Blankenship, who is from Ukraine. “When you have tweets about Ukraine most of them are just to stand in solidarity and support for Ukraine.”

In recent years, Russia’s propaganda machine has been described as “a firehose of falsehood.”

Now Russia has put that machine to work on how its invasion of Ukraine and Ukraine itself is perceived. Last month, the Economist reported it is “running at full throttle” to control the narrative about Russia’s invasion of Ukraine. Each post about Ukrainian neo-Nazis or Russian success on the battlefield, or the humanitarian acts of Russian soldiers that filters from Russian media and sympathizers across the web is a symbolic missile with the ability to impact multiple targets across multiple platforms.

Some of the barrages are stopped, but given the voluminous volleys, plenty still detonate.