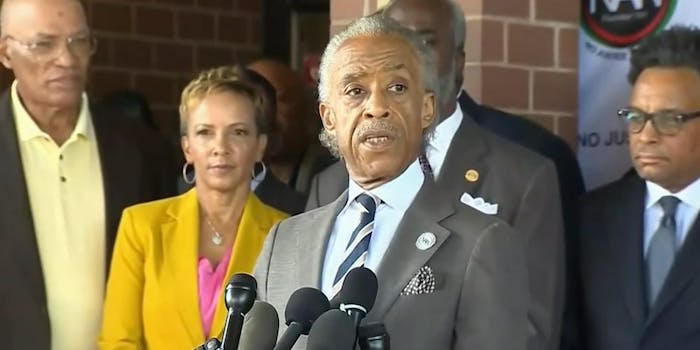 Al Sharpton says Trump ‘has a particular venom for Blacks’

Sharpton responded to Trump calling him a conman.

Reverend Al Sharpton was supposed to spend his morning talking about abating the housing crisis in the Black community.

Instead, he spent part of his trip to Baltimore addressing presidential Twitter trolling.

In a series of tweets this Saturday, the president derided Baltimore as a “rat and rodent infested mess” where “no human being would want to live.” Cummings, he said, is a “brutal bully, shouting and screaming at” Border Patrol about conditions in the camps, when “his Baltimore district is FAR WORSE and more dangerous … considered the worst in the nation.”

The attacks were immediately condemned as racist and inaccurate. In a widely shared clip, CNN anchor Victor Blackwell, a Baltimore native, fought back tears as he defended his hometown and addressed the impact of the president’s repeated use of racist innuendo when speaking of Black people and their communities.

Other prominent critics of the tweetstorm included Rep. Nancy Pelosi (D-Calif.), who grew up in Baltimore, Sen. Kamala Harris (D-Calif.), and the Baltimore Sun, which authored a scathing editorial calling Trump “the mocker of war heroes, the gleeful grabber of women’s private parts, the serial bankrupter of businesses, the useful idiot of Vladimir Putin and the guy who insisted there are ‘good people’ among murderous neo-Nazis,” concluding, “Better to have some vermin living in your neighborhood than to be one.”

In typical Trump fashion, the president continued lashing out at Cummings—who chairs the House Committee that last week subpoenaed cell phone and other records from Ivanka Trump, Jared Kushner and others—Baltimore, and Al Sharpton. Trump tweeted that Sharpton, a longtime civil rights leader and MSNBC host, was a “con man, a troublemaker” who “hates whites & cops.”

Sharpton quickly fired back, tweeting, “If he really thought I was a con man he would want me in his cabinet.”

Trump says I’m a troublemaker & con man. I do make trouble for bigots. If he really thought I was a con man he would want me in his cabinet.

This morning, Sharpton and other Black leaders, including former Republican National Committee chairman Michael Steele, addressed Trump’s attacks at a press conference during a previously scheduled event at a Baltimore Baptist church, “Reversing the Economic Erosion of Home Ownership in Black Communities.”

“I know Donald Trump, he’s not mature enough to take criticism,” Sharpton said. “He can’t help it. He’s like a child. Somebody say something, he reacts. He’s thin-skinned and not really mature…. But he has a particular venom for Blacks and people of color.”

Sharpton said that Trump uses different language when he criticizes whites like Pelosi and Sen. Chuck Schumer (D-N.Y.) than when he attacks Blacks. Moreover, Trump “doesn’t even know what he’s talking about.”

“The fact of the matter is that Elijah Cummings’ is the most well-educated and middle-class aspiring district of Blacks in this country,” Sharpton said.

Steele, former lieutenant governor of Maryland, invited Trump to actually visit Baltimore and speak to the people there. “Mr. President, come on down, the streets are ready for you, the people are ready for you … put the tweet down, brother, and show up,” he said.

Steele noted that Trump’s attacks were a distraction, but urged people to keep their eye on the prize: improving homeownership in Black communities.