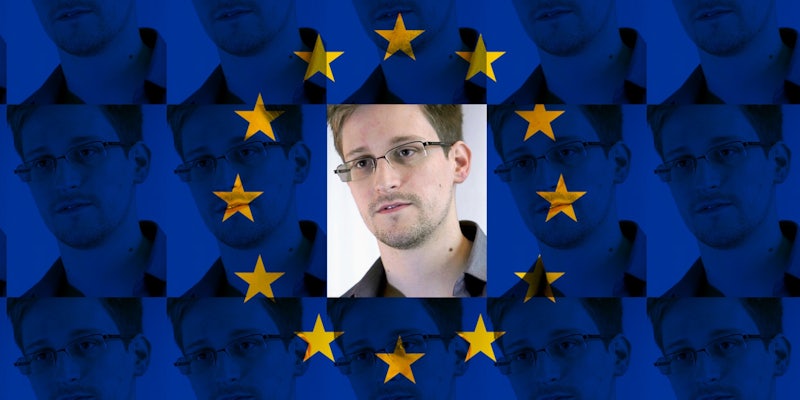 This could be a 'game changer,' Snowden says.

The future just got a bit brighter for Edward Snowden.

The European Union called on its member states to protect the former NSA contractor, recommending in a close vote Thursday that states drop charges against the fugitive whistleblower and reject U.S. extradition requests.

The 285-281 vote in the European Parliament suggested that states “drop any criminal charges against Edward Snowden, grant him protection and consequently prevent extradition or rendition by third parties, in recognition of his status as whistleblower and international human rights defender.”

Snowden’s disclosures about the National Security Agency’s global electronic surveillance programs touched off an international debate over the proper balance between privacy and security. The documents he provided to journalists revealed that the United States had, among other things, spied on foreign leaders, nongovernmental organizations, and the United Nations. American tech companies have suffered financially in the wake of the Snowden leaks, as foreign companies and governments reject their products out of fear that the NSA has compromised them.

If a European country promises not to extradite Snowden to the United States, and Snowden travels to that country, it could spark an international incident. The United States has extradition treaties with all European nations, and a pronouncement not to honor such an agreement would be nearly unprecedented.

A spokesman for the National Security Council did not directly address the vote in a statement to the Daily Dot.

“Our position has not changed,” NSC spokesman Ned Price wrote in an email. “Mr. Snowden is accused of leaking classified information and faces felony charges here in the United States. As such, he should be returned to the U.S. as soon as possible, where he will be accorded full due process.”

Upon hearing of the vote to recommend that states protect him, Snowden—who is living in Russia because the Obama administration suspended his passport as he tried to leave—called Parliament’s decision a “game-changer” and “a chance to move forward.”

This is not a blow against the US Government, but an open hand extended by friends. It is a chance to move forward. pic.twitter.com/fBs5H32wyD

A member of Snowden’s legal team in Europe praised the vote and urged E.U. member states to adopt the resolution.

“We welcome today’s decision of the European Parliament recognizing Edward Snowden as a human rights defender and calling upon member states to grant him protection from prosecution,” Wolfgang Kaleck, Snowden’s lawyer in Berlin, told the Daily Dot in an email. “It is an overdue step and we urge the member States to act now to implement the resolution.”

E.U. lawmakers also voted 342-274 to analyze how the European Union’s many agencies—including the European Commission, which oversees day-to-day E.U. policy—have responded to surveillance policy recommendations that Parliament set forth in March 2014. “In general, [lawmakers] consider the [European] Commission’s response so far to Parliament’s 2014 resolution ‘highly inadequate’ given the extent of the revelations of mass surveillance,” read a Parliament statement.

Parliament also told the European Commission to review the impact of the European Court of Justice ruling striking down a U.S.–E.U. data-sharing agreement known as Safe Harbor. The court found that the Safe Harbor agreement was invalid because U.S. surveillance of tech companies conflicted with E.U. privacy guarantees. American companies are now struggling to figure out how to legally transfer European employee and customer data back to their U.S. servers.

The Commission, according to Parliament, should “immediately take the necessary measures to ensure that all personal data transferred to the U.S. are subject to an effective level of protection that is essentially equivalent to that guaranteed in the E.U.”

Estelle Massé, a policy analyst in the Brussels office of the digital-rights group Access, said that her group was pleased with the outcome of the vote and the recommendations that lawmakers set forth.

“Access welcomes [the Snowden] provision and the report as whole, which builds on recommendations made last year by the European Parliament,” Massé wrote in an email. “The report clearly identifies that not only [has there not] been sufficient action taken to reform surveillance practices that affect individual rights, but that E.U. countries have put in place new surveillance measures.”