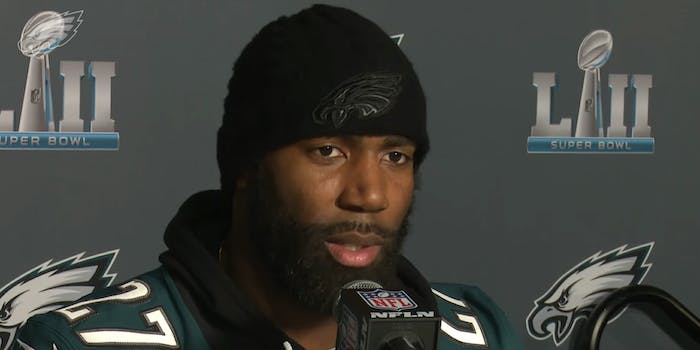 Some Eagles players come out against White House visit

'I personally do not anticipate attending that,' one Eagles player said.

Several players on the Super Bowl champion Philadelphia Eagles do not plan on attending the traditional visit to the White House later this year.

Wide receiver Torrey Smith, defensive end Chris Long, and safety Malcolm Jenkins are among players that will not travel to the White House and meet with President Donald Trump, according to NJ.com.

The president has been extremely vocal about his displeasure of NFL players kneeling during the national anthem this season as a way of protesting police brutality against people of color. At one point Trump called for protesting players to be fired and praised the “great anger” of fans who did not agree with the protests.

Trump also launched a petition about the protests, asking for names, emails, and zip codes of people “who stand for the national anthem.”

Trump fanned the flames shortly before the Super Bowl in a statement where he praised people who “proudly stand for the National Anthem.”

The pushback from the president seems to have caused several players to decide against the traditional visit to the White House.

Long, who did not attend the visit last year when he played for the New England Patriots, was unequivocal about his decision not to go. Last year, a number of Patriots players did not attend after winning the Super Bowl.

“No,” Long said last week during the Pardon My Take Podcast. “I’m not going to the White House. Are you kidding me?”

Meanwhile, Smith told NJ.com that calling it an “anthem protest” missed the point.

“They call it the anthem protest,” Smith told the news outlet. “We’re not protesting the anthem. It’s a protest during the anthem. I understand why people are mad, or may be offended when someone takes a knee. My father when he dies, is going to be buried with an American flag draped around his casket, being that he served in the army. I understand why some people are offended by it. Also, there are soldiers that have issues going on right now, and they are things that affect them. They’re things that affect my father. He understands both sides of the issue.”

When asked by CNN whether he had a message for Trump by not attending the traditional visit, Jenkins said he wanted to focus on advancing “positive change in the communities that I come from.”

“I personally do not anticipate attending that,” he said. “I don’t have a message for the president. My message has been clear all year. I’m about creating positive change in the communities that I come from, whether it be Philadelphia, New Jersey, Ohio, Louisiana, or this entire country. I want to see changes in our criminal justice system, I want to see us push for economical and educational advancement in communities of color and low income communities and I want to see our relationships between our communities and our law enforcement be advanced. That’s what myself and my peers have been pushing for for the last two years and that’s what I’ll continue to do.”