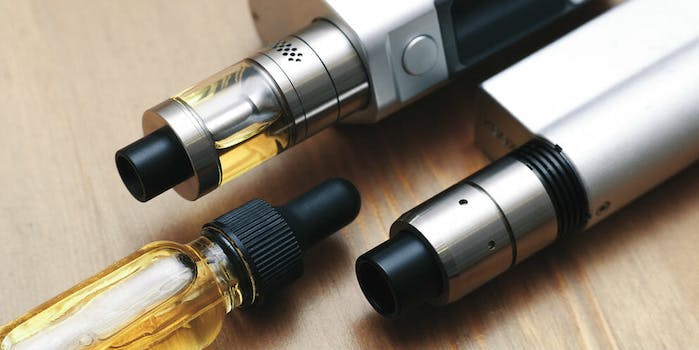 Smokers who use e-cigarettes are more likely to quit their nicotine habit than those who don’t, according to a recent study that looked at data spanning nearly 15 years.

Researchers at the University of California San Diego analyzed survey data of 161,054 people, of which 22,548 were current smokers and 2,136 were recent quitters. It concluded e-cigarette users are 25 percent more likely than non-users to attempt to quit smoking, and 3.4 percent more likely to succeed.

“We found that e-cigarette use was associated with an increased smoking cessation rate at the level of subgroup analysis and at the overall population level,” the study reads. “This is the first statistically significant increase observed in population smoking cessation among U.S. adults in nearly a quarter of a century.”

The study found a “substantial increase” in e-cig use was directly linked to a greater number of people who successfully quit smoking, or stopped for at least three months.

“We traced all the way back to 2001, and the surveys get done every three years on average—which means there are five surveys,” Shu-Hong Zhu, professor at the Department of Medicine and Family Health at UCSD told the Daily Dot. “For the first time, the succession rate when up. So I had a suspicion e-cigs might do that.”

The UCSD survey is unique because it analyzes data over time using population studies, specifically the Tobacco Use Supplement to the Current Population Survey. Researchers looked at data from 2014-15 and compared it to the same survey from 2011-12 to find a difference in the succession rate of smokers before and after the e-cig boom. In 2010, only 1.4 percent of the population used e-cigarettes, while 15 to 30 percent were using them by 2014. It discovered the overall population cessation rate in 2014-15 increased 1.1 percent from that in 2010-11. That might not seem like a lot, but it represents 350,000 additional smokers.

The study does have some limitations. Because it uses survey data, researchers did not receive detailed information about each participant, like the type of e-cig used or if they were also taking medication to quit smoking. The authors admit that national ad campaigns against smoking and a tobacco tax in 2009 may also have influenced the results.

Zhu said that while the TIPS from Former Smokers ad campaign in 2012 should be credited for part of the increased succession rate, increased tobacco taxes had a much smaller impact on smokers, “We all know that when you tax something, its use drops, so we all know the tax would have a big effect. There was an impact on kids—as far as the rate of starting smoking—but it turns out it didn’t impact adults. We looked two years after the tax increase, and the overall succession rate didn’t increase.”

The benefits of e-cigarettes have been a point of contention among scientists and users since they hit the market in the early 2000s. Most researchers agree they are a safer alternative to combustible cigarette smoking, but some studies found concerning amounts of cancer-causing chemicals and an increased risk of heart disease. Others argue the overall impact of e-cigs is negative because many people both vape and smoke combustible cigarettes, which lessens their urgency to quit smoking altogether.

The general consensus is that while e-cigarettes are safer than regular cigarettes—a low bar to reach—there are still a number of potential dangers, and more long-term research needs to be conducted.

The uncertainty surrounding the effects of e-cigs is made apparent by the variety of policies across different nations. The United Kingdom, for example, is very open to licensing e-cigs as a cessation aid to smoking. However, countries like the U.S. and Australia limit or ban the sale of e-cigarettes that contain nicotine.

In a move that greatly favors the e-cig industry, the FDA announced Friday that applications for e-cigarettes don’t have to be submitted until 2022, giving the vaping industry almost five years before it will be fully regulated by the FDA.

Zhu says it’s exactly the sort of regulation he and his team of researchers were hoping for. “The proposal we are trying to say is precisely what we want to see from the FDA.”

But more research needs to be done to successfully regulate what he considers a “balancing act.”

“There are a lot of details, like what is the role of flavor,” Zhu said. “A good flavor makes it attractive for adults, but also for kids. So how do you keep the balance—to help the adults, but don’t attract kids. The whole thing is a balancing act.”