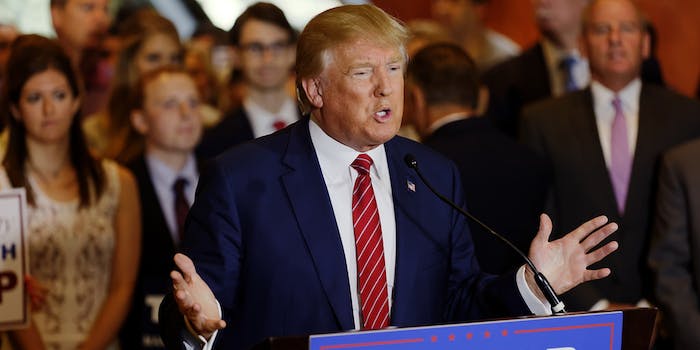 The retweet defense is not new, but it reached new heights this week.

Donald Trump‘s presidential campaign is defending its candidate for sharing inaccurate and racially inflammatory crime statistics by arguing that the Republican frontrunner merely retweeted what someone else tweeted.

“It was a retweet, that’s not something that Donald Trump put together,” Pierson said on CNN Tonight. “Had he put those numbers together and tweeted it, absolutely [the campaign would apologize], but that’s not the case.”

The New Yorker‘s Ryan Lizza, who had earlier tried to get the campaign to own up to Trump’s mistake, tweeted video of the CNN segment, in which he also appeared.

What happens when you ask Trump's spokeswoman about his false statements:

“Chances are, Don, he probably won’t do that again, at least not without checking the numbers,” Pierson said. “This came from somebody that he knew. It turns out it was a quote from somebody he knew that was tagged on it. And it was Twitter.”

It’s not clear to whom Pierson was referring in this explanation, but the graphic apparently originated on the Twitter account of a proud neo-Nazi.

“I’m not going to say that he did something wrong,” Pierson said, referring to Trump. “He retweeted something he probably shouldn’t have, but at the same time, had he put those numbers out himself, then yes, you’d be right.”