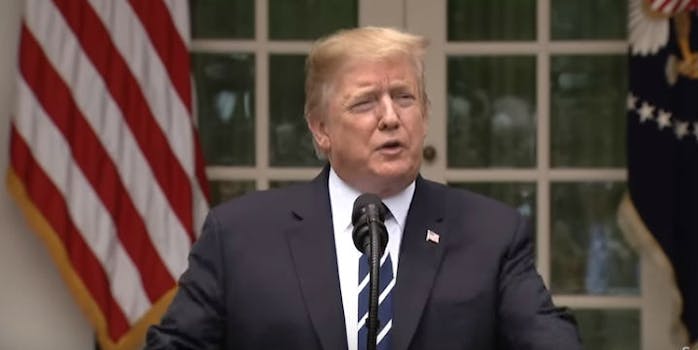 'Interest? Such a bold initiative.'

Friday afternoon in a ceremony in the Rose Garden, Trump announced that he would be waiving student loan interest “until further notice.”

“To help our students and their families, I have waived interest on all student loans held by federal government agencies and that will be until further notice,” Trump stated. “That’s a big thing for a lot of students who have been left in the middle right now.”

As the coronavirus continues to wreak havoc on the world economy, many Americans struggle to keep up with student loan payments. For them, Trump did not address their real concern.

Twitter users scoffed at the idea of waiving interest but doing nothing about the payments themselves.

One user accused many of being biased to Trump and stated that everyone would be behind it if Bernie was pushing the initiative. That notion was met with a swift rebuttal.

But Twitter user @cimarron_kid tweeted a valid concern. He wondered whether the interest will be added back after the waiver period.

“The devils always in the details. When this all over the ‘waived’ interest amounts will still be on the note and have further interest assessed against them until they become due when the waiving period is over,” the Twitter user wrote. “No free lunch.”

The interest can indeed be added back later in a “process called capitalization of unpaid interest,” according to the New York Times, but the publication is still investigating whether this would be the case for the coronavirus loan interest.