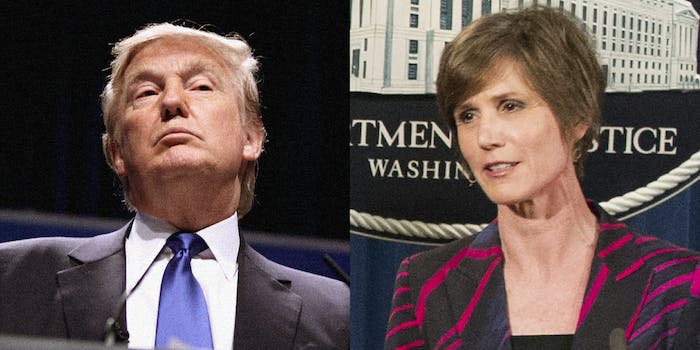 The 3 ways Trump might spin Sally Yates’ testimony on Russia

The president lashed out at Yates hours before her testimony.

If his Monday morning Twitter outburst is anything to go by, then President Donald Trump is sharpening his knives ahead of former acting Attorney General Sally Yates’ testimony before a Senate Judiciary subcommittee.

In the hearing, which is part of the ongoing Congress investigation into Russian collusion and meddling in the 2016 presidential election, Yates is expected to detail how she warned the Trump White House of former National Security Adviser Michael Flynn’s compromising association with a Russian ambassador—which, at the time, he denied.

The Trump administration reportedly ignored Yates’ concerns for two weeks, only dismissing Flynn when it emerged in the press that he had misled Vice President Mike Pence about the nature of his contact with the Moscow official.

Judging by the defensive nature of the president’s tweets, however, the White House is strategically bracing itself for what will be an uncomfortable and potentially damaging testimony.

There are numerous ways that Trump and his administration may spin the Yates hearing, but here are some of the most likely possibilities.

1) Abandon Flynn as the ‘fall guy’

According to Axios, administration officials have been lining up a case against Flynn and anonymously feeding it to the media. These officials reportedly have been claiming that “the White House and the national security process is infinitely more synchronized and functional without him. He isn’t missed,” as Axios put it.

This line draws its credibility from 2014 criticism of Flynn’s allegedly chaotic and aggressive managerial style when acting as director of the Defense Intelligence Agency under former President Barack Obama.

Axios suggest that West Wing officials are pursuing this narrative despite Trump’s reluctance. The president has stood by his old adviser to date, maintaining that he is a victim of a Democrat witch-hunt and endorsing Flynn’s desperate appeal for immunity from prosecution in exchange for testimony.

Trump’s first tweet of the day on Monday, though, seemed to show the president stepping back from Flynn. In a line of self-protection, which abandons protest of Flynn’s victimhood, attempts to shift the blame to Obama.

General Flynn was given the highest security clearance by the Obama Administration – but the Fake News seldom likes talking about that.

It’s possible that Trump will now opt to throw Flynn under the bus and claim that Flynn fooled him as he did Obama.

The Trump administration is exasperated with the allegations of Russian collusion, Trump himself publicly frustrated that this just won’t go away. Despite his success in pushing the American Healthcare Act through the House of Representatives last week, Trump asked aloud why journalists weren’t digging into Democratic “dealings with Russia.”

When will the Fake Media ask about the Dems dealings with Russia & why the DNC wouldn't allow the FBI to check their server or investigate?

The serious and extraordinary possibility that a foreign government interfered in the U.S. democratic process appears mere ammunition for partisanship. This, as far as Trump is concerned, is a “fake news” narrative to be dismissed, one peddled by Democrats to steal glory away from his election win.

James Clapper and others stated that there is no evidence Potus colluded with Russia. This story is FAKE NEWS and everyone knows it!

The Democrats made up and pushed the Russian story as an excuse for running a terrible campaign. Big advantage in Electoral College & lost!

In his second tweet of Monday morning, the president ventured another line of defense by posing that Yates may have leaked “classified information” to the newspapers when the White House failed to take her concerns seriously.

Added to that, Trump and Yates have been at odds before. As acting Attorney General, a holdover from the Obama administration, she was fired in January for her refusal to enforce Trump’s controversial immigration executive order. On this basis, he likely views Yates as a defiant Democrat ready to do what it takes to hurt his administration.

Taking on Yates directly, however, could prove riskiest of all options as it might mean confronting uncomfortable facts and the Russia allegations head on.