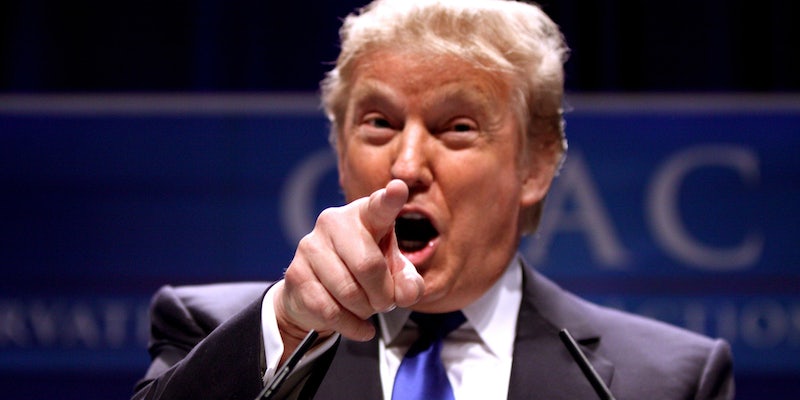 The political battle between Donald Trump and Ted Cruz is getting suspiciously personal.

In a tweet published Tuesday evening, Trump accused Cruz of promoting an anti-Trump ad that featured a nude photo of Trump’s wife, Melania.

Cruz shot back, denying his campaign made the ad. He also called Trump a “coward” and “classless” for his threat.

Pic of your wife not from us. Donald, if you try to attack Heidi, you're more of a coward than I thought. #classless https://t.co/0QpKSnjgnE

The ad in question was created by anti-Trump super PAC Make America Awesome, which promoted it on Facebook and Instagram for Mormon voters in Utah. The photo comes from a 2000 photo-shoot for GQ magazine. At the time, Mrs. Trump went by her maiden name, Knauss. The goal of the ad—one of three created by the super PAC—was to help push Cruz, a Texas senator, over the 50-percent mark in Tuesday night’s Utah caucus, which would result in Cruz receiving all 40 of the state’s delegates. If any candidate fails to hit 50 percent, the candidates will split the delegates proportionally, based on each candidate’s percent of the vote.

It is unclear what Trump, a New York businessman and the GOP presidential front-runner, meant in his threat to “spill the beans” on Heidi Cruz, the senator’s wife. Mrs. Cruz is an investment banker at Goldman Sachs and is heavily active in her husband’s presidential campaign.