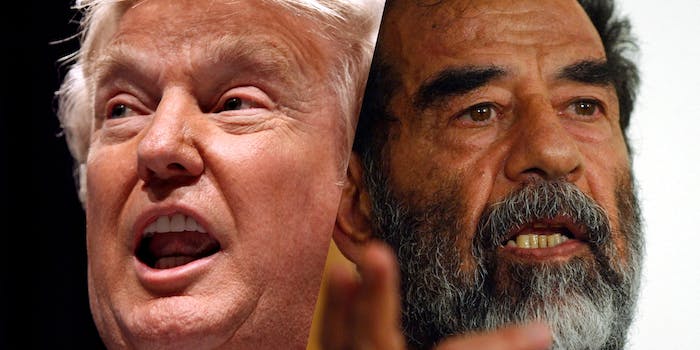 'He was a bad guy, really bad guy. But you know what he did well?'

In a speech in Raleigh, North Carolina, on Tuesday night, Donald Trump praised former Iraqi dictator Saddam Hussein for being a “bad guy” who killed terrorists “so good.”

“Saddam Hussein was a bad guy, right? He was a bad guy, really bad guy. But you know what he did well? He killed terrorists. He did that so good. They didn’t read them the rights—they didn’t talk, they were a terrorist, it was over,” Trump, the presumptive Republican nominee, said. “Today, Iraq is Harvard for terrorism. You want to be a terrorist, you go to Iraq. It’s like Harvard. OK? So sad.”

Harvard did not respond to our request for comment on Trump’s comparison in time for publication.

Trump’s praise of Hussein—a sentiment he first expressed on the campaign trail in February—falls in line with the businessman’s take-no-prisoners approach to terrorism, which includes support for torture of suspected terrorists and the execution of the families of terrorists. It also serves as a way for Trump to differentiate himself from his Democratic opponent, Hillary Clinton, who served as President Barack Obama’s secretary of state until early 2013.

A ruthless, brutal ruler and long-time enemy of the United States, Hussein heavily supported terrorist groups in the Middle East, according to the U.S. State Department, including the Iranian dissident group Mujahadeen-e-Khalq; the anti-Turkish government Kurdistan Workers’ Party; and Islamist Palestinian groups opposed to Israel such as Hamas, Islamic Jihad, and the Palestine Liberation Front. Hussein’s Iraq also funded Palestinian suicide bombers, according research by the Council on Foreign Relations, among other pro-terrorist activities.

In addition to supporting outside terrorist groups, Hussein attempted to exterminate the Kurdish people living in northern Iraq. During the so-called Anfal campaign, which began in 1988, Hussein’s forces used chemical weapons and other means to kill at least 182,000 of his country’s own people—including women, children, and the elderly.

Hussein’s alleged support of Al Qaeda was used by the George W. Bush administration to justify the 2003 invasion of Iraq, which Clinton voted in favor of as a U.S. senator from New York—a decision she later said she regretted. Trump has been largely critical of the Iraq War but at one point supported it.

Following his capture by U.S. military forces, Hussein was executed in December 2006 by the Iraqi Special Tribunal for the 1982 murder of 148 Shiite Muslims from the Iraqi town of Dujail.

Clinton’s campaign was quick to criticize Trump’s statements about Hussein, calling it an example of “how unworthy he is of the office he seeks.”

Said Jake Sullivan, a Clinton policy advisor, via statement: “Donald Trump’s praise for brutal strongmen seemingly knows no bounds. … In reality, Hussein’s regime was a sponsor of terrorism—one that paid families of suicide bombers who attacked Israelis, among other crimes. Trump’s cavalier compliments for brutal dictators, and the twisted lessons he seems to have learned from their history, again demonstrate how dangerous he would be as commander-in-chief…”

Speaking with Fox News’s Megyn Kelly on Tuesday, Speaker of the House Paul Ryan (R-Wisc.) agreed with Trump that Hussein was a “bad guy” and said he believes Trump is “far better to be commander in chief than Hillary Clinton in my mind,” but distanced himself from Trump’s praise of the former Iraqi president.

“He was one of the 20th century’s most evil people. He was up there. He committed mass genocide against his own people using chemical weapons,” Ryan said of Hussein, but added that he disagrees with Trump’s sentiment. “When he says things that I don’t agree with I’m going to speak my mind.”