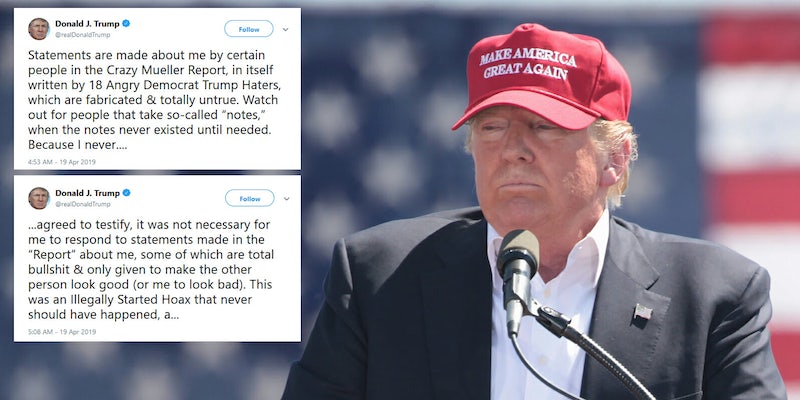 President Donald Trump took a victory lap amid the release of Special Counsel Robert Mueller’s report on Thursday, posting a Game of Thrones styled image on Twitter and claiming vindication.

But on Friday morning, as more details on his behavior relating to obstruction of the investigation came out, the president has changed his tune about the report—at least the parts about obstruction—calling some statements by former officials “total bullshit.”

“Statements are made about me by certain people in the Crazy Mueller Report, in itself written by 18 Angry Democrat Trump Haters, which are fabricated & totally untrue. Watch out for people that take so-called ‘notes,’ when the notes never existed until needed. Because I never….,” Trump wrote in a series of tweets. “…agreed to testify, it was not necessary for me to respond to statements made in the ‘Report’ about me, some of which are total bullshit & only given to make the other person look good (or me to look bad). This was an Illegally Started Hoax that never should have happened, a…”

The president did not finish his series of tweets, leaving a gap of 45 minutes between the last one being sent.

The “notes” Trump appears to be referencing are likely ones taken by former White House Counsel Donald McGahn, who according to the report, was chastised by the president for taking notes in a meeting.

The president asked him “why do you take notes?” before telling him “lawyers don’t take notes. I never had a lawyer who took notes.” In response, McGahn said he was a “real lawyer” and took notes to create a record.

Jody Hunt, the former chief of staff for former Attorney General Jeff Sessions, also apparently took notes in a meeting shortly after Mueller was appointed, which detailed the president saying: “this is the end of my presidency. I’m fucked.”

“….big, fat, waste of time, energy and money – $30,000,000 to be exact. It is now finally time to turn the tables and bring justice to some very sick and dangerous people who have committed very serious crimes, perhaps even Spying or Treason. This should never happen again!” he wrote.

….big, fat, waste of time, energy and money – $30,000,000 to be exact. It is now finally time to turn the tables and bring justice to some very sick and dangerous people who have committed very serious crimes, perhaps even Spying or Treason. This should never happen again!