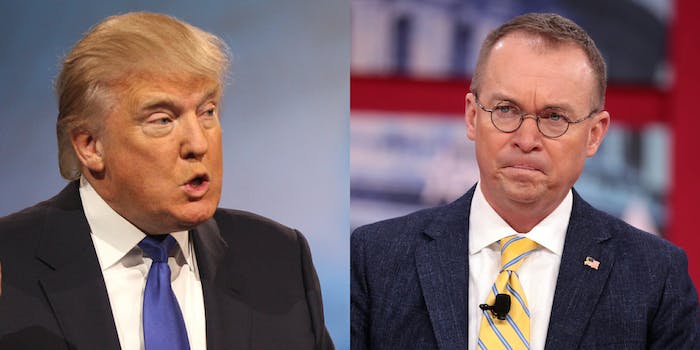 Trump clearly wasn't thrilled with his chief of staff coughing.

President Donald Trump ordered acting Chief of Staff Mick Mulvaney to leave the Oval Office during a television interview because he coughed mid-way through the president’s answer to a question.

The exchange was captured during an interview the president did with ABC News’ George Stephanopoulos.

During the interview, Stephanopoulos was asking the president about his finances, and during Trump’s answer it appears Mulvaney coughed.

That prompted a clearly agitated Trump to tell his acting chief of staff to leave the room.

Trump then shook his head and muttered “boy, oh boy.”

Pres. Trump says he “might” turn over his “financial statement” to Congress.

“I hope they get it, because it’s a fantastic financial statement,” he tells @GStephanopoulos in the Oval Office. https://t.co/8q0FwFD9qt pic.twitter.com/fw1tIc0vxO

Trump immediately asks if the answer can be re-shot, perhaps worried about the optics and sound, given his background in reality TV. The camera crew replies that they’ll re-shoot the answer from a different angle.

However, the president is also reportedly a germaphobe, so perhaps he simply didn’t want Mulvaney coughing in the same room as him.