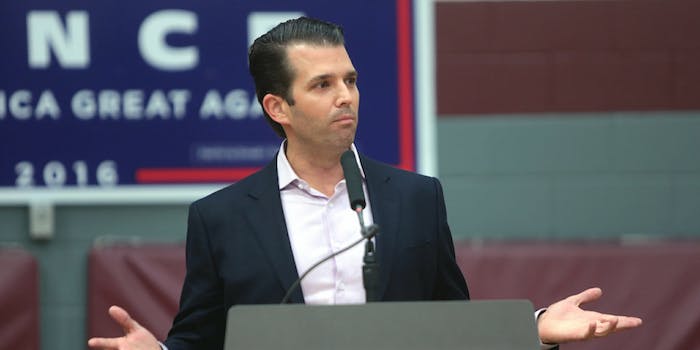 'This is obviously very high level and sensitive information but is part of Russia and its government's support for Mr. Trump.'

Donald Trump Jr. on Tuesday shared a stunning email chain detailing his orchestration of a controversial meeting between himself and an attorney described in one email as a “Russian government laywer” that has thrust him to the center of the largest ongoing scandal in American politics.

Trump Jr., the president’s eldest child, came under fire this week following a series of New York Times stories about the June 9, 2016, meeting at Trump Tower in New York. The emails Trump Jr. released via Twitter on Tuesday confirms he was told the meeting would entail damning information about 2016 Democratic presidential candidate Hillary Clinton provided by Russia’s government.

President Donald Trump and members of his team are currently part of an ongoing federal investigation into Russia’s attempts to meddle in the 2016 presidential election. Trump Jr.’s meeting with the Russian attorney provides the first clear evidence that people working on behalf of Trump attempted to collude with Russian figures. The emails Trump Jr. released show, in black and white, that he knowingly entertained this tactic.

In a statement posted along with the emails, Trump Jr. said he was sharing the correspondence “in order to be totally transparent.” His publication of the emails came just as the Times published a report detailing their contents.

In one of the emails—under the subject line “Russia – Clinton – private and confidential”—Goldstone describes Veselnitskaya as the “the crown prosecutor of Russia” who “offered to provide the Trump campaign with some official documents and information that would incriminate Hillary and her dealings with Russia and would be very useful to your father.”

“This is obviously very high level and sensitive information but is part of Russia and its government’s support for Mr. Trump,” Goldstone continued.

Trump Jr. appears unfazed by the prospect of Russian government documents aiding his father’s campaign for the presidency.

Here is page 4 (which did not post due to space constraints). pic.twitter.com/z1Xi4nr2gq

In an interview with NBC News on Tuesday, Veselnitskaya denied having connections to the Kremlin nor dirt on Clinton. “I never had any damaging or sensitive information about Hillary Clinton. It was never my intention to have that,” she said.

The attorney added that the Trump associates with whom she met were possibly “longing for such an information.”

“They wanted it so badly that they could only hear the thought that they wanted,” she said.

On Monday, Trump Jr. hired an attorney to represent him in Russia-related matters.