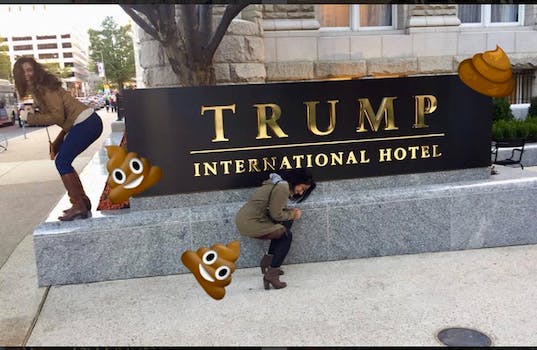 If you build it, they will desecrate it on social media.

The Republican presidential candidate was in the nation’s capital on Wednesday for the official opening of the Trump International Hotel. Here’s to hoping Trump didn’t check his latest real estate venture’s location tag on Instagram. Littered among the happy selfies of tourists sipping over-priced champagne in the gilded halls of Trump’s D.C. hotel are the sick, the sad, the inane.

Trump’s Pennsylvania Avenue hotel, which replaced the Old Post Office Pavillion after a $200 million dollar makeover, has already run into its fair share of problems, including alienating D.C.’s most famous chef and noted Hispanic José Andrés and suffering lackluster sales during the weekend of the World Bank-IMF meetings—one of the busiest nights of the year for area hotels.

Trump’s new hotel may rival the actual U.S. Capitol as the most widely despised landmark in town. #Draintheswamp, indeed.

The most popular pose by far for visitors to Trump’s new D.C. hotel is giving it the finger.

Some go for a film noir-esque effect with the Inkwell filter.

Ignorance is not the truth. Do not let apathy make us forget that we are all created equal and deserve to be treated that way. Fight for justice. Join the movement. November 5. #NoToleranceMovement #blacklivesmatter #howarduniversity #hu #dc #washingtondc #notolerance #america #activism #motivationmonday #protest #justice #equality #terrencesterling #trumptower #trump #trumphotel #tuesdaymotivation

A dash of Black Lives Matter graffiti on the Trump hotel and accompanying word art? Your 14-year-old sister would be proud.

But the prize for Trolling Trump’s New D.C. Hotel on Instagram goes to this dream team.

No wonder Trump isn’t so hot on unfettered free speech.