Every politician lies—some more than others.

It’s no secret that politicians lie. But Hillary Clinton’s reputation for doing so more than others is probably overblown, according a data visualization that started making its rounds this week. 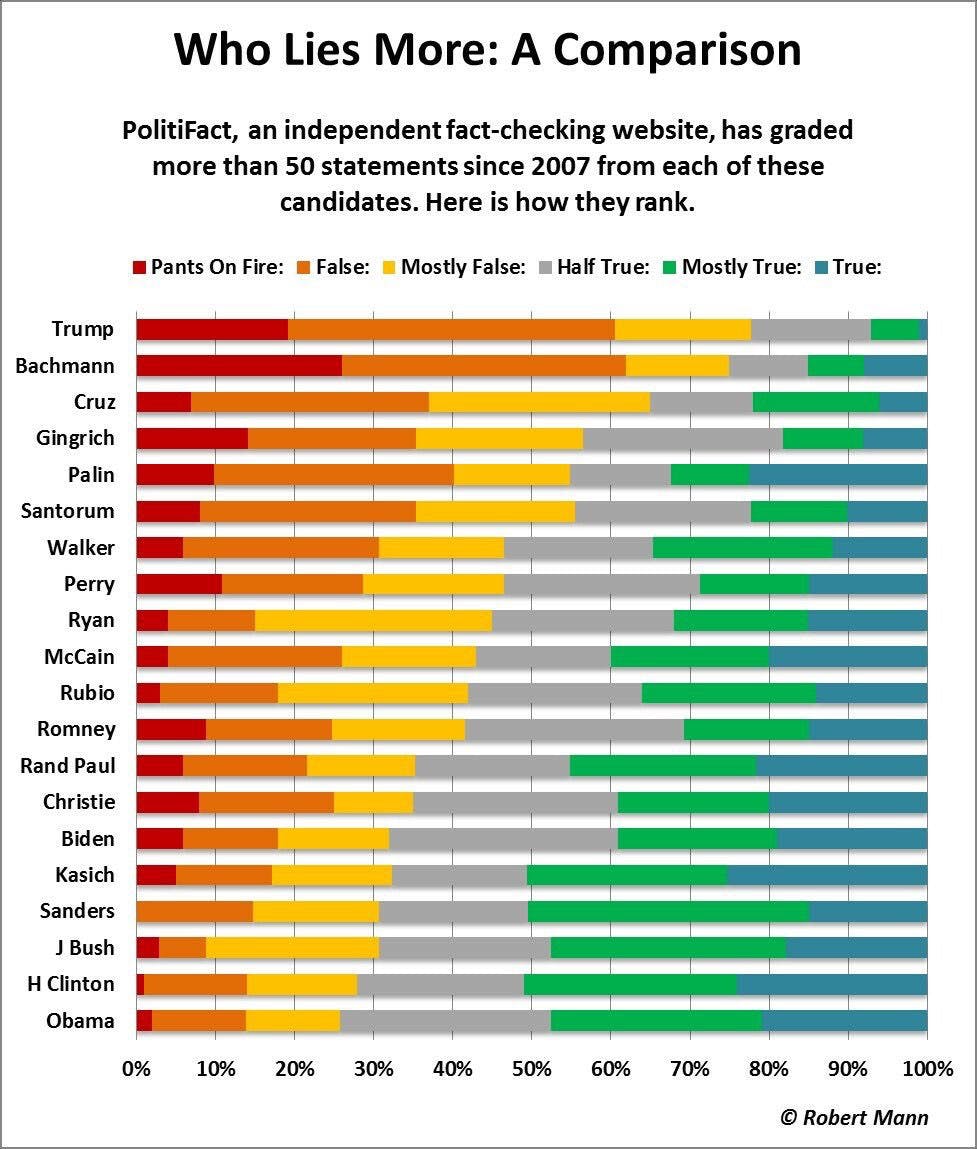 “Look: all politicians lie sometimes. That includes Hillary Clinton. But as the chart (above) shows, Hillary is one of the most honest politicians on the national stage,” wrote Mother Jones‘s Kevin Drum in a blogpost about the data.

This visual was first posted in July on Michael Sandberg’s Data Visualization Blog. Based on Politifact’s accuracy scale, it represents data based on more than 50 statements since 2007 from a handful of the country’s most prominent politicians.

Based on the data pulled from Politifact, Clinton—dubbed “Crooked Hillary” by her presidential race opponent Donald Trump —actually ranks as the country’s second most honest politician, with just over 70 percent of her statements ranking somewhere between “Half True” and “True.” President Barack Obama ranked No. 1 in honesty, with just a slightly higher percentage of his statements staying out of the “False” zone.

Trump ranked No. 1 for making the least true statements — which are depicted by the color blue.

How did Hillary Clinton earn her reputation as a liar?

From allegations that Clinton failed to respond to requests for additional security officials at the U.S. consulate in Benghazi, Libya, before it was attacked—which, by the way, Politifact deemed false—to her highly publicized email scandal, dubbed “Emailgate,” the former secretary of state has come under intense scrutiny by the GOP for alleged dishonesty. As Jim Geraghty wrote in an op-ed for the conservative magazine and website the National Review, “we do know Hillary Clinton from almost three decades in the national political spotlight. And we know she lies when she’s cornered.”

Geraghty goes on to prove his point by reminding his readers of all her alleged lies:

“Running from snipers in the Balkans, being ‘dead broke’ upon leaving the White House, ‘all my grandparents’ immigrated to America, her tale of trying to join the Marines, her claim she never received or sent any material that was classified on her private e-mail system, her claim to have started criticizing the Iraq War before Barack Obama did … she lies, and she lies, and she lies.”

True or not, Clinton’s reputation as a liar is hard-wired into voters’ brains, and it will likely take more than one infographic to change their way of thinking.

Back in April, the New York Times‘s Nicholas Kristof wrote about how these baked-in narratives impact politicians’ reputations:

[O]nce we in the news media had declared Gerald Ford a klutz (he was actually a graceful athlete), there were always new television clips of him stumbling. Similarly, we unfairly turned Jimmy Carter into a hapless joke, and I fear that the “Crooked Hillary” narrative will drag on much more than the facts warrant.

This is a narrative that goes way back and that this newspaper helped establish: My late friend and Times colleague William Safire in 1996 dubbed Clinton “a congenital liar.” But I think this narrative goes way too far.