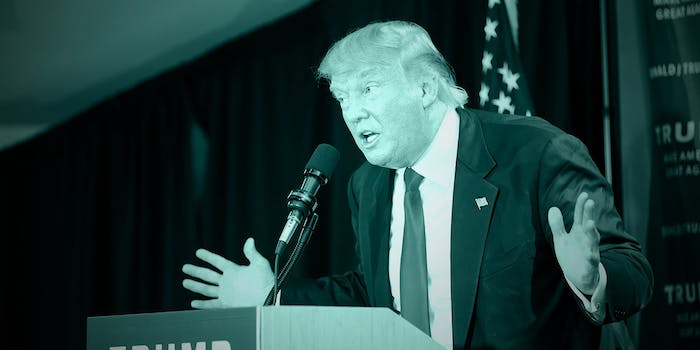 There's more to the story.

“We also need to make sure that the really discriminatory messages that Trump is sending around the world don’t fall on receptive ears,” Clinton said when asked about Trump’s proposed ban on Muslims entering the United States. “He is becoming ISIS’s best recruiter. They are going to people showing videos of Donald Trump insulting Islam and Muslims in order to recruit more radical jihadists.”

“He is becoming ISIS’s best recruiter.”

The short answer offered in numerous post-debate reports is that the source of Clinton’s remarks, a Dec. 8 NBC News article, contains no evidence that Trump has been used as a recruiting tool by ISIS.

Rita Katz, director of the SITE Intelligence Group, told NBC that jihadists “follow everything Donald Trump says,” and when he talks about banning Muslims from the U.S., “they tell people, ‘We told you America hates Muslims and here is proof.’”

David Phillips, director of the Program on Peace-Building and Rights at Columbia University’s Institute for the Study of Human Rights, also told NBC that Trump’s comments “will surely be used by ISIS social media to demonize the United States and attract recruits to fight in Iraq and Syria.”

As noted by FactCheck, Clinton stated—as if fact—something that experts have only speculated is happening. Jen Palmieri, a spokesperson for the Clinton campaign, said in a Sunday morning interview on ABC, “She’s not referring to a specific video, but he is being used in social media by ISIS as propaganda.”

The question remains, does Trump’s unique take on Islam—i.e., his proposed ban on non-U.S. Muslims, and widely discredited accusation about “thousands” of Muslims cheering during the Sept. 11, 2001 attacks—harden ISIS’s resolve?

Anyone elected president will be referenced by jihadi propaganda like numerous other U.S. leaders who hold lower offices. But it is also worth appreciating both the breadth and extreme nature of ISIS’s recruiting efforts. The group is behind a wide range of exceptionally brutal and fanatical content—beheadings, burnings, crucifixions, etc.

How much is a Donald Trump soundbite really worth?

Indictments of American foreign policy are the centerpiece of every jihadi group’s publications and in the missives of their leaders. Inspire, the propaganda magazine of Al Qaeda in the Arabian Peninsula (AQAP), for instance, cites the radical cleric Anwar al Awalki’s widely read Call to Jihad, which condemns the treatment of Muslims at the Guantanamo, Abu Ghraib, and Bagram prisons—an “ugly crime” AQAP says that “shook the conscience of humanity.”

ISIS, too, has referenced Guantanamo in its magazine Dabiq and elsewhere. In the video depicting his murder, American-Israeli journalist Steven Sotloff speaks into the camera and recalls Obama’s campaign promise to close the facility. “Here you are now, Obama, nearing the end of your term,” Sotloff says, “having achieving none of the above, and deceivingly marching us the American people in the blazing fire.”

“We need to take step back and evaluate our counterterrorism methodologies.”

But despite widespread insistence by experts that Guantanamo’s continued operation encourages the mindset that Americans are accepting of torture and prisoner abuse, a memo leaked by the Trump campaign in June revealed the candidate’s proposal to expand the use of the prison camp to house Americans suspected of lending support to ISIS; a move legal experts are certain would violate a U.S. citizen’s constitutional rights.

On Sunday, Trump told a radio host that the camp should be filled with more people, not only because it’s “secure” but because “we’ve already, you know, paid for it.”

One of the chief goals of jihadi propaganda, according to Michael German, a fellow at the Brennan Center for Justice, is to drive a wedge between the people the terrorists consider part of their “identity group”—namely Muslims who don’t support their politics or brutality—and everyone else.

“The purpose of it is to do something so horrible that it compels an overreaction that targets a wider group of people, because of who the terrorists claim to represent,” said German, who infiltrated U.S.-based terrorist groups undercover during his 16 years at the Federal Bureau of Investigation.

“Just the notion that policy makers are now once again talking about making war on a terrorist group that didn’t exist when we started our war on terrorists should be a sign that this response isn’t effective,” German said. “We need to take a step back and evaluate our counterterrorism methodologies, and stop doing the things that actually aid and expand terrorism.”