When you argue about politics on Facebook, everyone loses.

Ever get the feeling that the random Donald Trump supporter you’re arguing with online just isn’t on your level?

Chances are, he isn’t—when it comes to grammar, at least.

That’s according to a new study by the service Grammarly, which analyzed random Facebook comments from people supporting 19 different 2016 candidates.

After studying thousands of comments on those candidates’ Facebook pages, Grammarly found two overwhelming trends: Democrats use better grammar than Republicans, and generally speaking, the more popular a candidate is—regardless of party—the more likely it is that their Facebook pages will be filled with grammatical errors.

Fans of both Democrat Hillary Clinton and Republican Carly Fiorina made an average of 6.3 grammatical mistakes per 100 words. But fans of every other Democratic candidate in the study—Sen. Bernie Sanders (I-Vt.), former Virgina Sen. Jim Webb, former Maryland Gov. Martin O’Malley, and former Rhode Island Gov. Lincoln Chafee—made fewer mistakes than that.

Chafee’s commenters took first place among Democrats, while Sanders’ commenters fell right in the middle of the pack, with 3.7 grammatical errors per 100 words.

Commenters on the pages of the 13 Republican candidates had increasingly worse grammar, ending with real estate mogul and reality TV star Donald Trump, whose Facebook fans had a whopping 12.6 errors per 100 words. 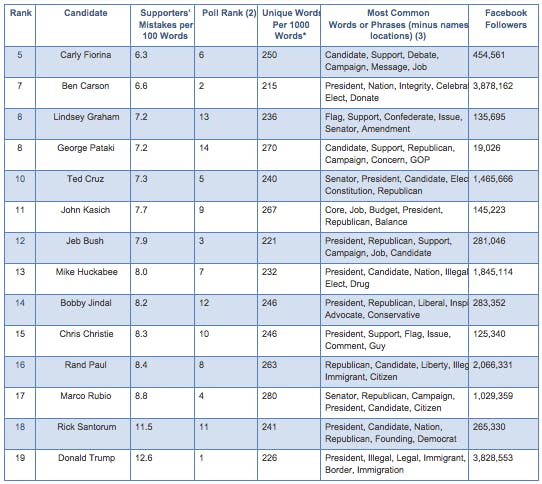 In other words, if the previous paragraph was written by an average Trump supporter who argues on the Donald’s Facebook page, it would contain at least 10 grammatical errors. 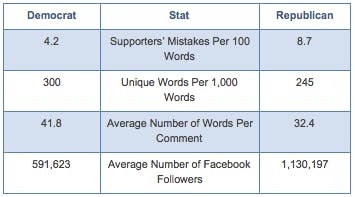 Of course, none of this means that all supporters of these candidates lack a solid grasp on the English language. No matter which candidate you support, if you’re arguing with someone about politics on Facebook, it’s unlikely either of you will come away any smarter.