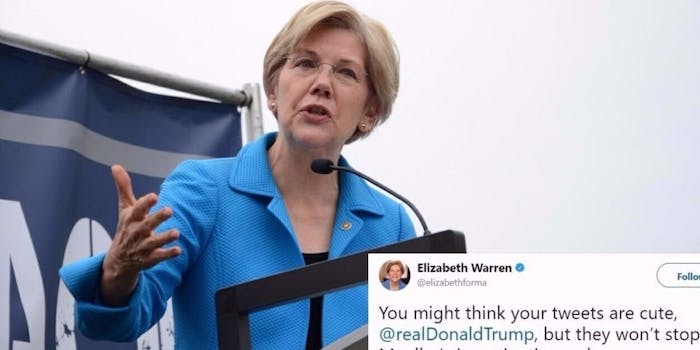 Trump has continuously referred to Warren as “Pocahontas,” a racist slur, because of the controversy surrounding her self-described Native American heritage. Warren, though, has used it to her advantage, buying Pocahontas.com and redirecting it to her campaign site.

On Friday, though, she had harsh words for the president and reminded him that he can’t insult his way out of his own troubles.

I understand your desperation to change the subject, @realDonaldTrump. Your campaign mgr was just indicted for conspiracy against the US. https://t.co/Bazcx4IbX2

You might think your tweets are cute, @realDonaldTrump, but they won’t stop Mueller's investigation or keep your people out of jail.

Slurs, lies & trash talk won’t stop the FBI from doing its job. This isn't a dictatorship. It's our democracy. And it's stronger than you.

On Monday, Trump’s former campaign chairman Paul Manafort turned himself into the FBI after he was indicted in Special Counsel Robert Mueller’s Russia probe, and former foreign policy adviser George Papadopoulos pleaded guilty to making false statements to the FBI regarding his attempts to dig up “dirt” on Clinton from Russian sources.

Since then, Trump has tried to spin the attention onto Clinton and the apparent financial highjacking of the Democratic National Committee by Clinton during the 2016 presidential primary.

In May, Warren said she had “no doubt” Trump was trying to shut down the Russian investigation by firing former FBI Director James Comey, a move that puts the president at the center of a possible obstruction of justice case.