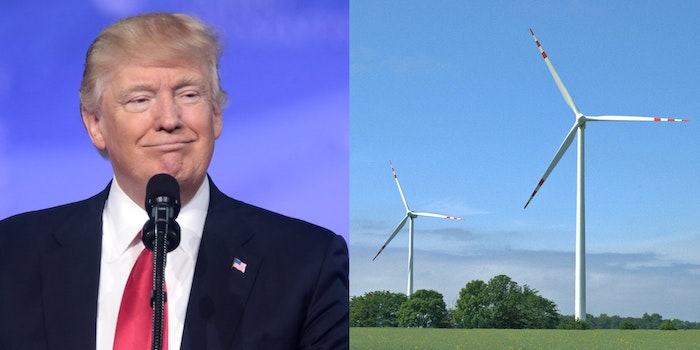 Trump again shows how much he really doesn’t like windmills

Trump has a history of bashing windmills.

President Donald Trump on Monday said he wouldn’t sacrifice the “wealth” in the United States in order to make way for “dreams” and “windmills” when he was asked about climate change.

The president made the remarks when speaking at the G-7 summit in France.

“I feel that the United States has tremendous wealth, the wealth is under its feet. I’ve made that wealth come alive… We are now the number one energy producer in the world, and soon it will be by far,” Trump said, adding: “I’m not going to lose that wealth. I’m not going to lose it on dreams, on windmills, which, frankly, aren’t working too well.”

Trump adding windmills into his answer on Monday isn’t the first time he’s bashed the form of generating electricity.

In April, when speaking to the National Republican Congressional Committee, Trump implied that the noise generated by windmills causes cancer while he bashed the Green New Deal proposal.

A week before that, he told a crowd of supporters that if the wind wasn’t blowing, it would lead to power outages. The Department of Energy’s website refutes that claim.

Earlier this month, he also railed against windmills while speaking to a crowd.

“The previous administration they liked windmills, you know windmills?” he said. “If a windmill is within two miles of your house, your house is practically worthless. They make noise, they’re intermittent, they kill your birds, they break down all the time, you have to replace them every ten years because they wear out, and they cost a fortune and they need subsidy. Other than that they’re quite good.”

So, all in all, it’s clear Trump clearly isn’t a fan of windmills.