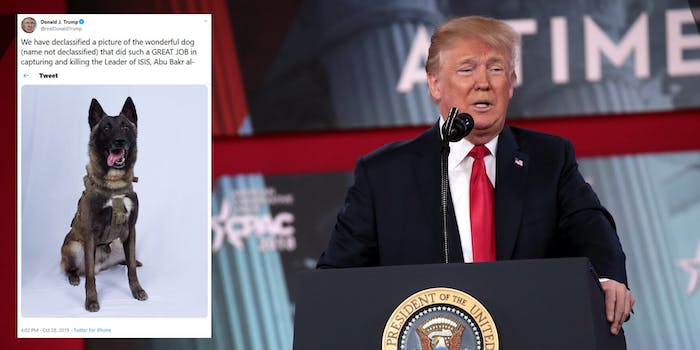 The name of the dog remains classified, Trump said.

President Donald Trump on Monday released a photo of the dog that was involved in the special operations raid that killed Abu Bakr al-Baghdadi, the leader of the Islamic State.

Trump announced the death of al-Baghdadi on Sunday. In remarks, the president said dogs “chased him down” before killing himself and three children. One of the dogs was hurt, Trump said, and was “brought back” following the raid.

“It was actually—look, nobody was even hurt. Our K-9, as they call—I call it a dog, a beautiful dog, a talented dog—was injured and brought back. But we had no soldier injured. And they did a lot of shooting, and they did a lot of blasting, even not going through the front door,” the president said on Sunday, according to a White House transcript. “You know, you would think you go through the door. If you’re a normal person, you say, ‘Knock, knock. May I come in?’ The fact is that they blasted their way into the house and a very heavy wall, and it took them literally seconds. By the time those things went off, they had a beautiful, big hole, and they ran in and they got everybody by surprise.”

On Monday, Trump released a photo of the dog, but said the name would remain classified.

“We have declassified a picture of the wonderful dog (name not declassified) that did such a GREAT JOB in capturing and killing the Leader of ISIS, Abu Bakr al-Baghdadi!” the president wrote on Twitter.

Trump’s decision to share a picture of the dog might be the only universally praised tweet he’s ever sent. Because if there’s one way to guarantee likes online, it’s with a

Roots out terrorists. Gets right back up when he's hurt. Loves America. We rate this dog 15/10. https://t.co/QUWq58g0Ig

The dog is a Belgian Malinois, similar to the one used by Navy SEALs in the Osama bin Laden raid.