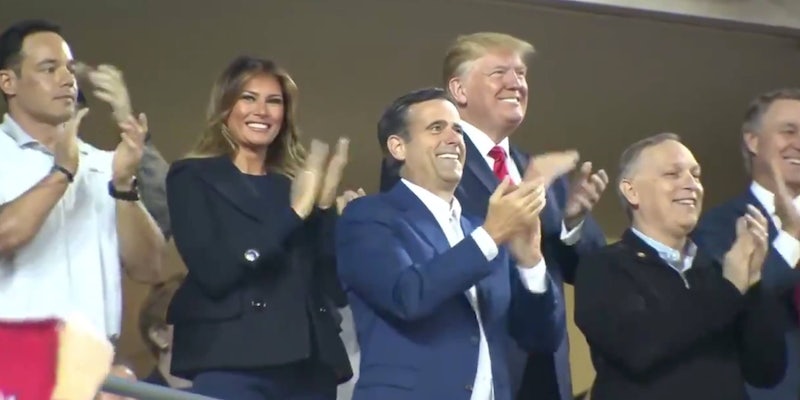 They let their opinion be known.

In nearly three years in office, President Donald Trump has rarely ventured outside the White House into Washington, D.C., save for crossing the street to the hotel he owns.

Perhaps now we know why.

With the Washington Nationals in the World Series, Trump decided to attend Game 5 against the Houston Astros. He surrounded himself in a luxury box with wounded veterans and Republican sycophants.

And when he was introduced during the game, the crowd—which has been ornery after back-to-back losses—made themselves heard.

Some think his face turned into a grimace when he heard it. You be the judge.

it is not enough but i do enjoy watching his face change when he realizes he is being booed https://t.co/d7Mmn3Lm2r

Look how Trump’s face changes when he realizes an entire stadium is booing him pic.twitter.com/E46rzbzmbl

But one thing is certain. With the president facing impeachment in the House, the crowd let him have a taste of his own medicine.

Full on “LOCK HIM UP! LOCK HIM UP!” chants heard throughout the crowd at Nats Park after President Trump was announced and shown on screen here #WorldSeries pic.twitter.com/1ktVXkHYFy

The Nats are currently losing 4-0.