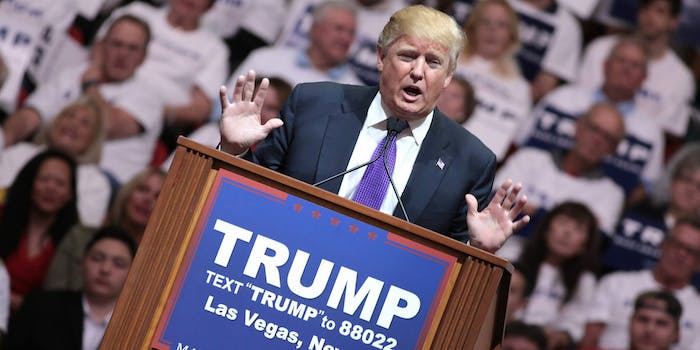 Donald Trump says there’s been ‘no violence’ at his rallies

Days after a Donald Trump supporter elbowed a protester in the face on video, the Republican presidential front-runner on Monday denied any instances of violence or injuries at his presidential campaign events.

Speaking with CNN’s Wolf Blitzer, Trump brushed aside the characterization of “violence” at his rallies as a myth propagated by the media and downplayed the reported fights and scuffles as insignificant.

“If one person gets up and starts shouting and the police walks that person out, they try and make it like it’s a violent thing,” Trump said. “It’s not violent. It’s a protester that stands up or probably a disruptor, because I think they’re sent there by people on the other side.”

“But there’s no violence,” Trump added. “Nobody’s been hurt.”

In December, a Trump supporter reportedly said “light the motherfucker on fire” in response to a protester. Others reportedly yelled out “Shoot him!” and “Kick his ass!”

Last month, a Time magazine photographer was tackled by a U.S. Secret Service agent. The Trump campaign denied any responsibility for the incident.

On Friday, Michelle Fields, a reporter for pro-Trump news blog Breitbart, filed a criminal complaint against Trump’s campaign manager Corey Lewandowski over allegations that he grabbed her and pushed her to the ground while asking Trump a question at a Trump event in Juniper, Florida, last Wednesday. Trump said Fields may have “made up the story,” despite video evidence and eyewitness reports to the contrary.

Also on Friday, the Trump campaign canceled its event in Chicago due to sparks of violence between gathered supporters and protesters prior to Trump’s arrival in the Windy City. Trump blamed supporters of Democratic presidential candidate Sen. Bernie Sanders for the upheaval.

Sanders dismissed the idea that his supporters were inciting violence and called on Trump to condemn violence at his rallies, which Sanders says the real estate magnate “encouraged.”

Bernie Sanders is lying when he says his disruptors aren't told to go to my events. Be careful Bernie, or my supporters will go to yours!

John McGraw, the 78-year-old Trump supporter who elbowed Rakeem Jones in the face at a campaign rally in Fayetteville, North Carolina, on Wednesday later said he enjoyed “knocking the hell out of that big mouth.” He added, “Next time, we might have to kill him.”

Trump will hold a campaign event in Youngstown, Ohio, on Monday night.