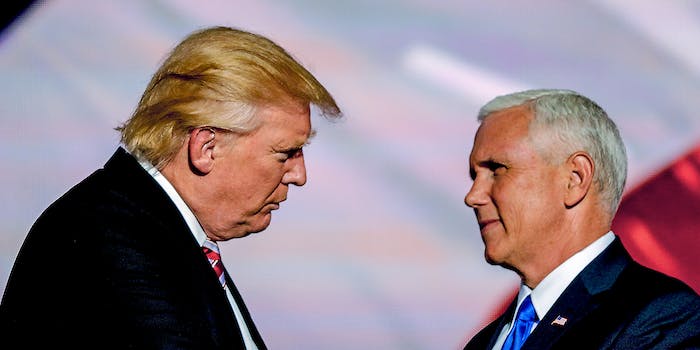 On Jan. 6, frenzied supporters of former President Donald Trump attempted to overturn the election results at the U.S. Capitol. The mob, which rioted and broke into the building, was willing to execute lawmakers to do so. One of their more unexpected targets was then-Vice President Mike Pence. Footage showed the crowd chanting, “Hang Mike Pence.”

On Friday, news broke that mere months after the riot, Trump defended rioters’ calls to murder his vice president.

In an audio clip obtained by Axios, Trump told ABC News reporter Jonathan Karl that he understood why the crowd wanted to hang his second-in-command.

Asked if he worried about Pence during the riot, Trump replied, “No, I thought he was well-protected, and I had heard that he was in good shape.”

Then Karl, who interviewed Trump on March 18 at Mar-a-Lago, brought up the chants about Pence.

“He could have—well, the people were very angry,” Trump replied

This the closest Trump has come to publicly agreeing with the mob’s murderous intentions towards his vice president.

“Trump never condemned those chants of ‘Hang Mike Pence’ that the world heard on January 6. And when I interviewed him for Betrayal, he defended them,” Karl tweeted Friday morning.

Trump’s term was characterized by unprecedented and stunning incidents. Defending calls to execute his vice president is seen as extreme, even for him.

“I shouldn’t be shocked at this point … but wow,” Chris Kocher tweeted.

Some wondered if Pence and the Republican Party would remain loyal to Trump in light of the revelations.

ABC News’ This Week will air the full interview on Sunday.