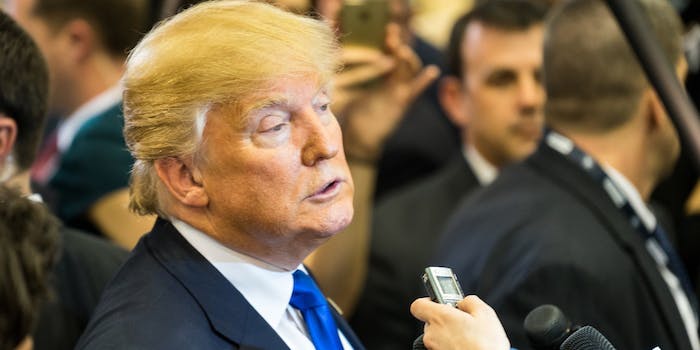 Trump: Russian election hacking would be called ‘conspiracy theory’ if I lost

Is the president-elect a victim here?

President-elect Donald Trump on Monday morning said cast further doubt on the veracity of reports that the Central Intelligence Agency has discovered a wealth of evidence that Russia instigated hacks with the intention of helping him win the presidency.

Tens of thousands of emails and documents from both the DNC and Podesta were published by WikiLeaks, which says it does not know the source of the materials. Publication of the stolen emails played heavily in the 2016 president election.

Trump’s claim that it is difficult to identify the source of cyberattacks is true—but doing is far from impossible, particularly for entities with vast resources, like the CIA, NSA, or FBI. And these agencies trace the source of hacks on a regular basis.

The FBI, whose investigation of Clinton’s use of a private email system as secretary of state also played a major role in the election, has cast doubt on the Post article’s assertion that Russia’s goal was specifically to help Trump. Sources tell the New York Times that it believes the Russian government had a range of goals, although the agency does not deny Moscow’s alleged involvement.

As for Trump’s question—“Why wasn’t this brought up before the election?”—it was. Trump was repeatedly informed that U.S. intelligence agencies believe Russia’s government perpetrated the hacks against Democratic Party entities since mid-August, months before Election Day. The intelligence agencies made this information public on Oct. 7.

Finally, Trump’s claim that reports of Russians hacking the U.S. election would be dismissed as a “conspiracy theory” had he lost is entirely speculative.