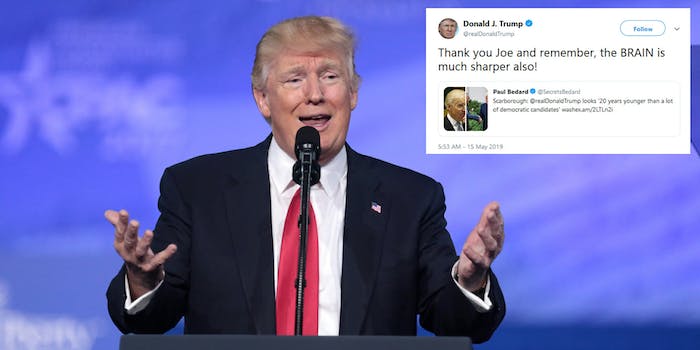 It's the latest attack from Trump directed at the former vice president.

The president retweeted a Washington Examiner article highlighting how Morning Joe host Joe Scarborough said Trump looked younger than a number of 2020 Democrats who are vying to square off against him in the next presidential election.

“Thank you Joe and remember, the BRAIN is much sharper also!” Trump wrote early Wednesday morning.

Thank you Joe and remember, the BRAIN is much sharper also! https://t.co/h1fG1GRQ99

This is the latest attack on Twitter from the president directed at Biden, who leads a number of polls among Democratic primary voters in the early stages of the process.

Last week, Trump called the former Vice President “SleepCreepy Joe” in a tweet predicting that he would beat out Sen. Bernie Sanders (I-Vt.) for the Democratic nomination for president.

The president also touched on the “brain” aspect shortly after Biden announced his bid for the presidency, tweeting that he hoped he “had the intelligence, long in doubt, to wage a successful primary campaign.” Trump also attacked Biden after he received the endorsement of a firefighters union.

But the attacks haven’t just been recent—there was also the odd “fist fight” back-and-forth talk between the two men in early 2018.

The recent slings against Biden could be rooted in the president’s belief that the former veep has the best shot of defeating him in the general election.

Last month, Politico reported the president has privately asked his aides how they were “gonna beat Biden?” in a potential election match up.