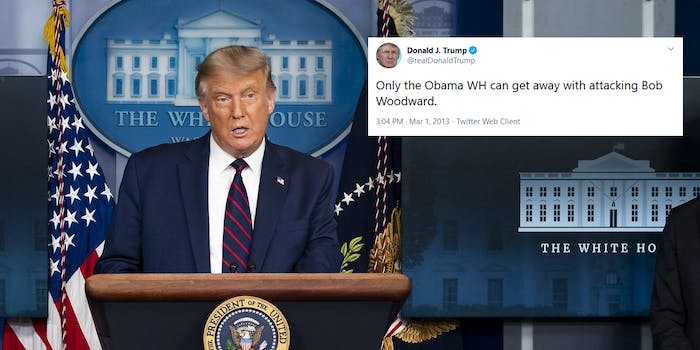 As Trump deals with the fallout of statements he made to Bob Woodward again, an old tweet of his is making the rounds.

President Donald Trump is attacking journalist Bob Woodward after he revealed that the president knew the coronavirus was “deadly” months before the country took massive actions to contain the spread of the pandemic.

Those revelations, including an audio recording of Trump saying those things to the journalist and author, will be part of Woodward’s upcoming book Rage.

The president also told Woodward in mid-March that he wanted to “play it down” in regards to the coronavirus because he didn’t “want to create a panic.”

Despite this, Trump is bashing Woodward for having a “boring book” and seizing onto the idea that he should have come forward with the quotes earlier. He’s also called the upcoming book “just another political hit job” and said Woodward was “rapidly fading.”

However, the president was singing the journalist’s praises just a few years years ago.

Like countless times before, there is always a tweet—and people online were quick to resurface it. In fact, this isn’t the first time Trump’s old Woodward tweets have come up amid his criticism of the journalist.

It seemed that Trump had a much higher opinion of Woodward when he was in the middle of a back-and-forth with President Barack Obama’s administration.

“Only the Obama WH can get away with attacking Bob Woodward,” Trump tweeted in March 2013.

As Snopes reported in 2018, around the time Woodward’s other book about the Trump administration came out, the now-president’s tweet seemed to be in reference to an Obama administration official disagreeing with an opinion piece Woodward wrote about Obama and the federal budget.

So, just like the last time, Trump’s old tweets are coming back to contradict him.