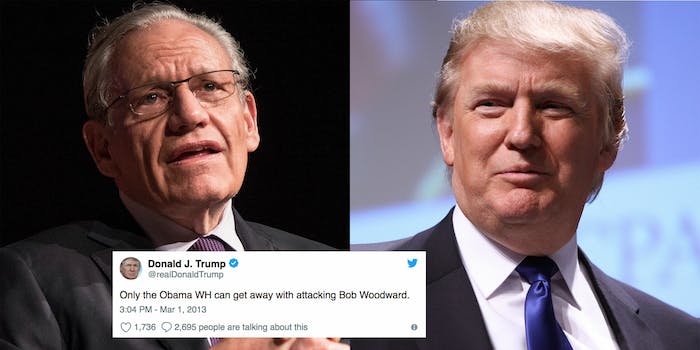 President Donald Trump is worried that Bob Woodward’s next book is going to be “bad,” the Washington Post reports. But if the president needs assurance that Woodward is an able journalist, he only needs to look as far as his own tweets.

Woodward’s 448-page book is an intimate look at chaos and happenings surrounding Trump’s White House that have gone unreported until now, according to the Post. The anecdotes are based on first-hand accounts from members of the administration and others with deep knowledge of it.

Woodward describes ‘an administrative coup d’etat’ and a ‘nervous breakdown’ of the executive branch, with senior aides conspiring to pluck official papers from the president’s desk so he couldn’t see or sign them.

But for all his reporting, Woodward wasn’t able to land a conversation with Trump himself—until the manuscript was already finished. Only then did Trump say he wanted to participate, claiming in a phone call with the journalist that “nobody” except Sen. Lindsey Graham (R-S.C.) ever mentioned Woodward’s project to him.

The Post published audio from an 11-minute phone conversation between Trump and Woodward. In the call, Trump at first acknowledges that Woodward is “fair.” Woodward then warns Trump that his book is a “tough look” at the state of affairs in the White House.

“Right. Well, I assume that means it’s going to be a negative book,” Trump says, which leads to a prolonged back-and-forth about whether or not Woodward tried to contact him. Toward the end of the call, Trump says, “So, we’re going to have a very inaccurate book, and that’s too bad.”

After a day of media frenzy over the book, Trump tweeted on Tuesday evening that the book “has already been refuted and discredited” by Secretary of Defense James Mattis and White House Chief of Staff John Kelly. Trump also accused Woodward of being a “Dem operative.”

The Woodward book has already been refuted and discredited by General (Secretary of Defense) James Mattis and General (Chief of Staff) John Kelly. Their quotes were made up frauds, a con on the public. Likewise other stories and quotes. Woodward is a Dem operative? Notice timing?

But Trump need not worry that Woodward hasn’t done his due diligence. On top of Woodward’s proven credentials, like helping lead the Post‘s Pulitzer Prize-winning coverage of the Watergate scandal, Trump himself has previously heaped praise on the journalist.

Thank you to Bob Woodward who said, "That is a garbage document…it never should have been presented…Trump's right to be upset (angry)…

Only the Obama WH can get away with attacking Bob Woodward.

Trump—and the rest of the world—will be able to judge the caliber of Woodward’s book Fear following its release on Sept. 11.