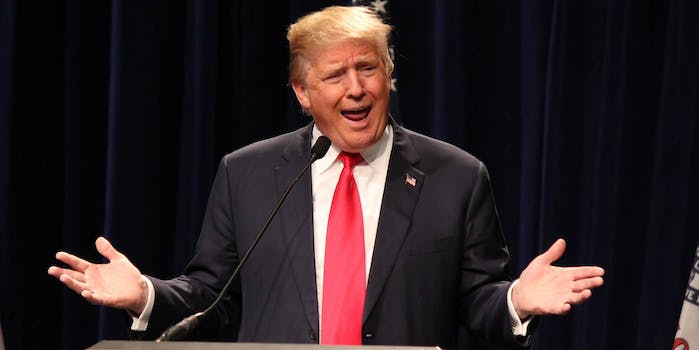 Trump also said he thought Sanders would be easier to beat in November.

Donald Trump was apparently not serious when he agreed to debate Bernie Sanders.

After likely Democratic nominee Hillary Clinton backed out of a scheduled debate with Sanders in California ahead of the state’s June 7 primary, Sanders challenged Trump to a replacement debate. When Jimmy Kimmel relayed the challenge to Trump, who appeared on his show on Wednesday night, the real estate mogul and reality TV star immediately accepted.

“If I debated him, we would have such high ratings, and I think I should take that money and give it to some worthy charity,” Trump said. “If he paid a nice sum toward a charity, I would love to do that.”

Kimmel then suggested that the network airing the debate put up the money instead, and Trump agreed. “That could happen also,” he said.

Sanders’s campaign almost immediately tweeted that the senator was excited to move forward.

But on Thursday morning, Trump campaign sources told both CBS News and Time that Trump was joking.

Despite this, Sanders campaign manager Jeff Weaver told MSNBC that the two campaigns were discussing the possibility.

Earlier in the Wednesday night interview, Trump told Kimmel that, despite polls showing Sanders beating him by a larger margin than Clinton, “Bernie would be easier to beat” than Clinton in the general election.

The independent Vermont senator trails the former secretary of state by 271 pledged delegates. She also has 537 superdelegates, while he has 42.